The youthful palpebral fissure is long and narrow with a slight lateral upward inclination.

Distortions of, or deviations from, this shape may be secondary to heredity, aging, paralysis, trauma or previous surgery. This distortion of shape inevitably manifests as rounding of the fissure with inferomedial descent of the lateral canthus and concomitant descent of the lower lid margin. Lateral canthopexy, the surgical repositioning of the lateral canthus is fundamental to altering or restoring the shape of the palpebral fissure.

Anatomically, the lateral canthus is more correctly termed a lateral retinaculum. The retinaculum receives contributions from the lateral horn of the levator aponeurosis, the lateral extension of the preseptal and pretarsal orbicularis oculi muscle (lateral canthal tendon), the inferior suspensory ligament of the globe (Lockwoodâ€™s ligament), and the check ligament of the lateral rectus muscle . It splits into anterior and posterior leaflets. The anterior leaf is contiguous with the orbital periosteum. The posterior leaflet inserts on the lateral orbital tubercle (Whitnallâ€™s). Change on the point of attachment

or length of the retinaculum will cause significant changes on eyelid shape, tension and coutour (Ref 2,3).

Lower eyelid tarsus suspension was originally described by Lexer and Eden (Ref3) in 1911, followed by Sheehan (Ref 5). Since then, many different techniques have been designed to restore lateral canthal position and to correct lower eyelid malposition. Two requisites of lateral canthopexy make it technically challenging â€“ symmetry and stability. Suturing of lateral canthal structures to similar points on the inner aspects both lateral orbital rims can be difficult. Stable suture fixation can also be challenging, particularly when previous eyelid surgery has scarred and distorted periorbital tissues.Â  First Hinderer (Ref 6)Â  and then Whitaker (Ref 7) Ortiz-Monasterio and Rodriguez (Ref 8), and then Flowers (Ref 9) reported techniques utilizing drill holes made in the lateral orbital rim whichÂ  provided points of fixation which were both anatomically defined and secure.

In this article we describe our technique of lateral canthopexy, an adaptation of the one described by Whitaker (Ref 8).Â The lateral canthal structures are purchased

with a figure of eight suture of titanium wire. Drill holes are placed in the lateral orbital rim using the zygomaticofrontal sutures as reference landmarks. This measured placement aids in achieving symmetric canthal repositioning.Â  The bridge of bone between the drill holes provides a stable platform over which the wire ends can be tied. Fine adjustments can be made to the canthal position

by twisting or untwisting the wire ends.

of the lateral canthus soft tissue mechanism. Its efficacy is based on the stable suture fixation point provided by drill holes placed in the bone of the lateral orbit.

This procedure can be performed under local

Figure of Eight Suture (Figure 2b)

with a figure of eight suture without freeing

relative to the lateral commissure, and the position

of the lateral orbit drill holes. This approach is most often appropriate when there is minimal commissure malposition and no local scarring from previous lid surgery.

When more significant movements of theÂ  lateral commissure and lid margin are desired, complete subperiosteal freeing of the lateral retinacular structures is required before figure of eight suture purchase of both limbs of the ligament. Through the lateral extent of the lower blepharoplasty incision, the lateral retinaculum is identified and dissected, and both limbs of the lateral canthus are purchased with a figure-of-eight 30- or 32-gauge titanium wire suture. If middle lamellar scarring from previous lower lid surgery restricts canthal movement, the lateral third of the middle lamellae is sufficiently incised with needle tip electrocautery to allow it to be freely mobile.

Through the upper access approach, the zygomatico-frontal suture is identified. This suture provides a landmark to allow symmetric placement of drill holes made in the lateral orbital rim. Using the zygomatico-frontal suture as a landmark two drill holes are placed in the lateral orbital rim. The position of the lower drill hole is key, since it determines the maximum upward movement of the canthus. The upper drill hole is necessary to create the â€œbridge of boneâ€ â€“ a stable fixation point.

The lateral canthal position and aperture shape are determined by the position of the drill holes, which should be 2-3 mm above the medial canthal plane to give the intercanthal axis a slight upward tilt. The drill holes should also be placed in the internal orbit about 3-4 mm posterior to the anterior margin of the lateral orbital rim so the lateral lid will not be drawn away from contact 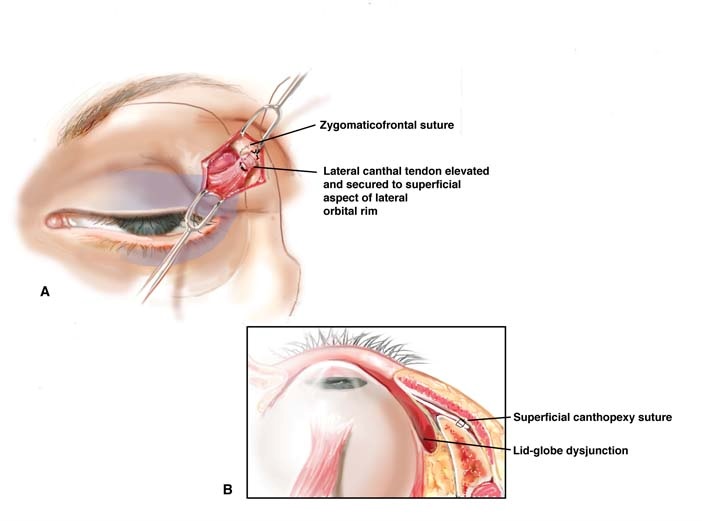 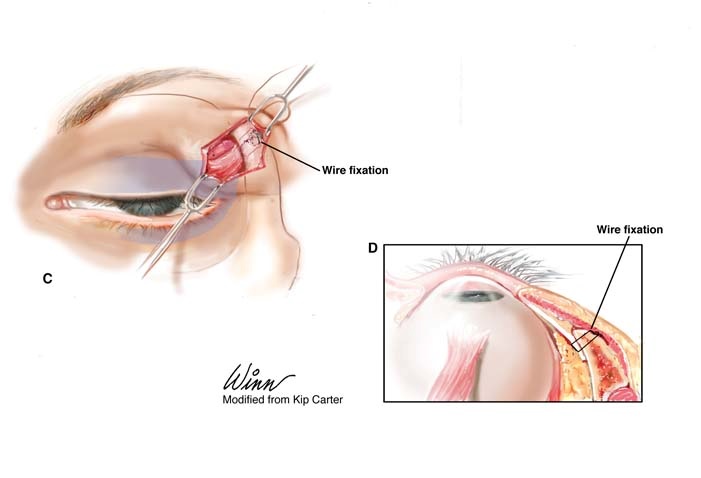 To determine the ideal position

of the drill holes, one can grasp the lateral canthus and tuck it against the lateral orbital rim until the desired canthal and lower-lid position is obtained. The positions are marked and drill holes are made at that point. Most often, they are positioned just at, and 2mm below, the zygomaticofrontal suture. Each end of the wire is then passed from within the orbit through the drill holes to the lateral orbital rim. The wires are then twisted to one another over the bridge of bone between the two holes. Wire twisting will determine canthal movement. The location of the lower drill hole dictates the limit of movement.

by simply twisting or untwisting the wires. It is not necessary to repeat the suturing process

. In addition, this length allows the ends to be placed into one of the drill holes or into the orbit. This maneuver avoids postoperative visibility or palpability of the wire ends.

incisions are used for access, an ellipse of skin and muscle is removed from the lateral aspect of the upper lid to remove the lid redundancy caused by the upward movement of the canthus. The wounds are closed in layers.

When extensive dissection is performed, post-operative chemosis is common. In addition to ophthalmic lubricants, I have found that a temporary tarsorraphy stitch left for 5 to 7 days significantly attenuates this process. The tarsorrhaphy is performed by placing a single

5-0 nylon suture through the upper and lower lid margins and adsjacent skin. Tying the suture approximates the lids.

Clinical examples of the use of the â€œbridge of bone canthopexyâ€™ are demonstrated in figures 4-7.

with or without its disinsertion. Since it does not violate the lateral commissure or lower lid margin, it maintains or has the potential to restore palpebral fissure shape, including the lateral canthal angle. Canthoplasty procedures such as the lateral tarsal strip, by design, alter the shape of the palpebral fissure, because they disrupt the lateral commissure while shortening the lower lid margin (Ref 10). Â Lateral canthal/horizontal eyelid shortening procedures were first developedÂ  to treat functional eyelid disorders. By decreasing the surface area of exposed cornea they ameliorated symptoms of â€˜dry eyesâ€™ . They were later adapted to aesthetic surgery as prophylaxis against or to correct

post blepharoplasty lid malposition. These lid margin shortening procedures are appropriate treatment for senile ectropion and entropion â€“ situations where the lid margin is redundant.Â  Their aesthetic implications should not be discounted

. Canthoplasty procedures may be effective in elevating the lower lid, but often exaggerate the senile or post surgical distortion of palpebral fissure shape. Â Figure 8. 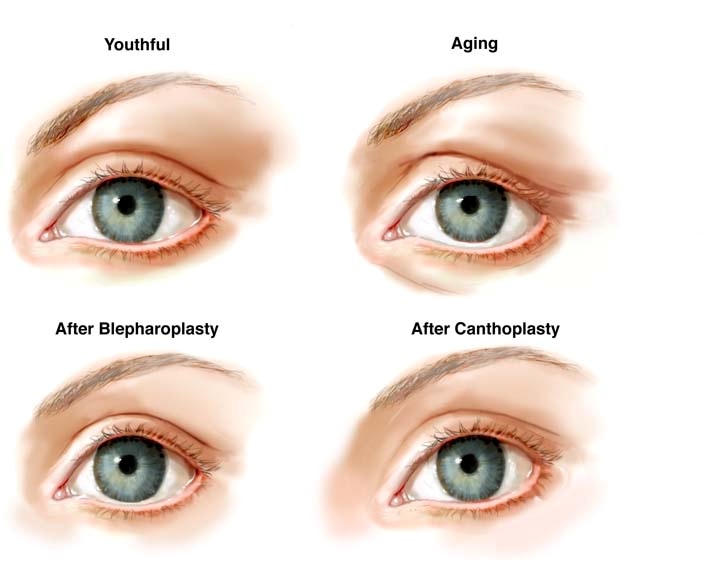 cheek and lid tissues (Ref 11). To provide support for lid and midface soft tissues, sagittal augmentation of the infraorbital rim is added to the lid and canthus repositioning algorithm in post blepharoplasty patients with midface skeletal deficiency (â€˜morphologically proneâ€™ (Ref 12).

of the Orbit. New York: Macmillan.

by a figure-of-eight, 30-gauge titanium wire suture. C) The ends of the suture are passed along the lateral orbit from the lower lid to the upper lid (or coronal) incision.Â  To ensure adequate vertical mobility

of the lateral canthus and lateral lid margin, it may be necessary to incise the lateral third of the scarred and contracted lid lamellae. D) Each end of the wire suture is passed from within the orbit through drill holes made in the lateral orbital rim that were placed at the zygomaticofrontal suture and 2-3 mm below it. The ends of the wire suture are twisted to one another over the bridge of bone. Passing the wire from inside to outside the orbit applies the lid to the globe.

to the periosteum of the anterior surface of the lateral orbital rim. Note

the gap between the surface of the globe and the lateral aspect of the lower lid.

Figure 5- A 27 year old woman who not had previous orbital surgery desired upward movement of her lateral canthus. (above) Preoperative frontal view). Below (6 month postoperative view.