Commentary on: The Role of Microfat Grafting in Facial Contouring

The authors present their use of microfat grafting as an alternative to the advancement of skeletal osteotomies performed for purely aesthetic concerns.1 They appropriately emphasize the not-insignificant complications and morbidity associated with orthognathic procedures to justify their less morbid treatment preference. Although not mentioned by these authors, fat grafting would also avoid the dysaesthetic contour irregularities intrinsic to skeletal osteotomies and advancement. These iatrogenic aesthetic deformities are particularly troubling when orthognathic procedures are performed for purely aesthetic reasons. The authors are complemented on their operative facility and aesthetic results. However, it is important to emphasize that there is a difference in the resultant facial contour when it is altered by expanding the soft tissue envelope as opposed to increasing the projection of the underlying skeleton. Upon review of the patient examples included in this manuscript as well as those presented in the supplement, I find that the bottom line is: the postoperative appearance is better than the preoperative in all cases. Especially impressive is the ability to increase the vertical height of the chin as shown in patient example 1. The creation of a symmetric inferior border that merges imperceptibly with the adjacent anterior mandible is impressive. Unquestionably, the patientâ€™s chin looks better after microfat grafting than it did before. But it looks different than it would if its increased projection had been based on the projection of the underlying skeleton as opposed to augmenting the overlying soft tissue envelope. In fact, it looks a bit swollen, similar to the look of the cheeks and chins in the other patient examples. I have found that small augmentations of either the underlying skeleton or the overlying soft tissue envelope are almost clinically imperceptible in terms of the resultant facial contour. However, when skeletal or soft tissue deficits become more severe, their correction requires use of the appropriate tissue or tissue substitute. Although both modalities result in an augmentation of facial contour, the aesthetic result obtained with fat grafting is different from that of skeletal advancement. A progressive increase in the projection of the facial skeleton by osteotomy and advancement or alloplastic augmentation results in a facial contour that is increasingly skeletal and defined. On the other hand, a progressive increase in the volume of the overlying soft tissue envelope results in afacial contour that is increasingly less defined.

As noted earlier, skeletal osteotomies with advancement will result in secondary deformities which, when the surgery is performed for primarily aesthetic reasons, can be troubling and even disfiguring. For example, bilateral sagittal split osteotomy (BSSO) and chin advancement to increase the projection of the deficient mandible inevitably results in contour irregularities of varying degrees. 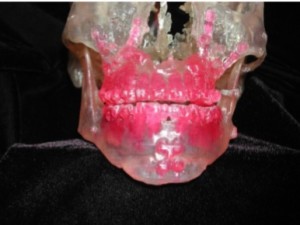 As shown in Figure 1, these include the anterior irregularities along the inferior border after osteotomy and advancement of the chin, and the posterior after-sagittal split osteotomy and advancement of the body of the mandible. The asymmetry of the posterior mandible after BSSO can be even more distorting due to the lack of control of the positioning of the aesthetically sensitive ramus and angle. The position of the ramus is dictated by the need for the condyle to be in the fossa and the proximal aspect to be positioned in a way to allow sufficient bone contact with the tooth-bearing segment to allow proper fixation and healing. Because the sagittal osteotomies are never identical from side to side, the osteosyntheses and resultant bone alignments are different. With these two points of the ramusdictated, the position of the angle follows passively. This results in varying degrees of asymmetry in ramusheight and facial width. The secondary complications described above or the iatrogenic deformities associated with skeletal osteotomies and advancement are other reasons to avoid orthognathic surgery when functional issues are not involved. Whereas the authors prefer to improve facial contour for skeletal deficiency with microfat injection, I prefer to augment the skeleton with alloplastic implants.2 Similarly, I correct postorthognathic skeletal irregularities with implants, often with computer designed and manufactured implants based on the data derived from the CT scan of the patient. Depending on their severity, these secondary deformities may provide another application for their microfat grafting technique to improve facial contour.

Disclosures The author declares no potential conflicts of interest with respect to the research, authorship, and publication of this article.