In patients with recessive infraorbital rims, alloplastic augmentation of the infraorbital rims makes the eyes appear less prominent and improves appearance. Ten patients (seven women and three men) with an average age of 30 years (range, 23 to 45 years) underwent augmentation of the infraorbital rim with alloplastic implants over a 9-year period. With an average follow-up of 3 years (range, 6 months to 6 years), reconstructions have remained stable and satisfactory, with no incidence of infection, infraorbital nerve damage, or palpebral fissure distortion. One patient underwent additional surgery to correct contour irregularities, and one patient requested implant remoral 1 month after surgery. (Plast. Reconstr. Surg. 107: 1585, 2001.) 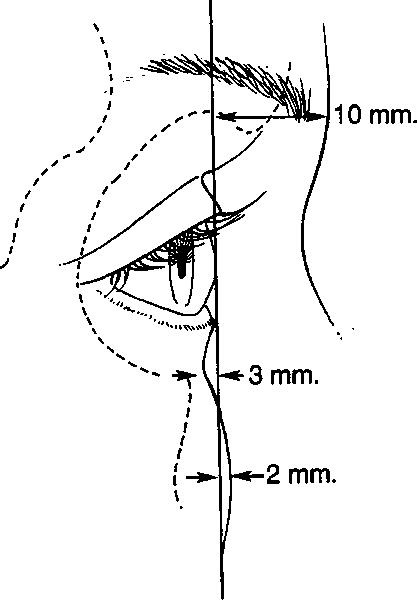 Enophthalmos is the condition in which the globe is positioned too far behind the orbital rims. Most often, this occurs after traumatic disruption of the internal orbit, with a resultant increase in orbital volume and sinkingin ofÂ the eye. This problem is corrected by restoring the internal orbital anatomy and, hence, orbital and soft-tissue volume relations to effectively push the globe out. Certain craniosynostoses result in underdevelopment of the frontalÂ bone and midface, with marked projection of the globe beyond the orbital rims. When this disproportion is severe enough to cause symptoms of corneal exposure or to be disfiguring, osteotomies are performed to allow skeletal advancement and improvement of globerim relationships. When globe-rim disproportions are less severe, they are usually left untreated.

Augmentation of the frontal area with alloplastic materials, particularly methylmethacrylate, is often performed to improve surface contours in patients undergoing secondary procedures for various craniosynostoses or post-traumatic deformities.5 The malar component of maxillary hypoplasia is routinely corrected with the placement of alloplastic malar implants by aesthetic surgeons.6 Augmentation of the orbital rims, specifically to improve globe-rim relationships in patients with microform variants of congenital deformities or in â€œnormalâ€ patients with prominent eyes, has received litde attention.

Marchac7 noted that prominent eyes could be camouflaged by augmenting the supraorbital rim. He wrote that methylmethacrylate was the most suitable implant but that the use of alloplastic material always had the risk of late complications. No clinical data were presented in his article. Whitaker et al.2 reported on augmentation of the supraorbital rim with onlay bone grafts and pericranial flaps in nine patients to improve globe-supraorbital rim relationships. Infraorbital rim augmentation to improve sagittal globerim relations has received even less clinical documentation. In 1991, Hinderer8 reported the use of lower orbital rim implants to increase orbital depth in six patients and to correct congenital malformations or post-traumatic deformities in another 15. Hinderer preferred the use of cartilage or bone for rim augmentation, and he presented the correction of both post-traumatic and congenital deformities in his article. Without documenting clinical experience, Agban9 and, more recently, Terino10 reported the efficacy of silicone rubber implants in augmenting the infraorbital rim in patients with maxillary hypoplasia. Flowers,11 who has expertise in both periorbital rejuvenation and skeletal contouring with alloplastic implants, has described augmenting the infraorbital rim when correcting the tear trough deformity in certain patients. He believes that suborbital malar hypoplasia often contributes to or exaggerates this deformity. For that reason, he has designed tear trough implants with various lateral extensions designed to correct specific areas of malar hypoplasia. His â€œcomprehensiveâ€ design implant involves the entire malar area, including a majority of the infraorbital rim.
This article presents techniques for and clinical experience with the alloplastic augmentation of the infraorbital rim. By improving the sagittal relations between the globe and infraorbital rim, these techniques were used to improve the appearance of the upper third of the face in nine patients. The results have remained satisfactory, with minimal associated morbidity.

Early in the series, the infraorbital rim was augmented with customcarved pieces of porous polyethylene (Fig. 2). In the last five cases, an implant specifically designed for augmentation of the infraorbital rim was used (Fig. 3; Porex Surgical, Newnan, Ga.). This implant can provide up to 5 mm of anterior projection and is trimmed to meet the specific needs of the patient. A small flange allows it to rest on the most anterior aspect of the orbital floor. This flange allows easier positioning of the implant and a possible area for screw fixation to the skeleton.

The infraorbital rim and adjacent anatomy must be exposed sufficiently to assure ideal implant placement, smooth implant facial skeleton transition, and screw fixation. Direct, subciliary skin or skin-muscle flap incisions can provide this exposure. A transconjunctival incision alone is inadequate for implant placement and screw stabilization. A transconjunctival retroseptal incision, if used, requires lengthening with a lateral canthotomy or combination with intraoral and coronal incisions. 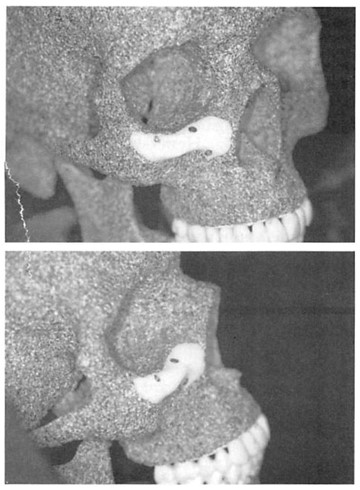 Fig. 3. Implants designed specifically for infraorbital rim augmentation allow up to 5 mm of anterior projection (Porex Surgical). They are carved to meet the specific needs of the patient. Screw fixation assures application of the implant to skeleton, thereby preventing gaps between the implant and the skeleton and aiding a smooth implant-skeleton transition. {Above) Oblique view. {Below) Lateral view.

Fixing the implant to the skeleton with two or three self-drilling titanium screws (Osteomed Corp., Addison, Texas) allows precise application of the implant to the surface of the skeleton. This ensures the desired augmentation, because gaps between the implants and the skeleton effectively result in unplanned increases in augmentation. Screw fixation also allows an imperceptible transition between the area augmented and the adjacent skeleton.
The implants used in this series were not impregnated or irrigated with any antibiotic solution. Intravenous antibiotics (usually a cephalosporin) were administered just before surgery. Oral antibiotics were administered for 5 days after surgery.

The infraorbital rim was augmented to improve globerim relationships in 10 patients over a 9-year period. The follow-up ranged from 6 months to 6 years, with an average of 36 months. The average age of the three men and seven women was 30 years (range, 23 to 45 years). The cause of the globerim disproportion was maxillary hypoplasia (four patients), Crouzonâ€™s disease (one patient), trauma (two patients), thyroid ophthalmopathy (one patient), radiation-induced growth disturbance (one patient), and Treacher-Collins syndrome (one patient). One of the patients in this series required additional surgery for revision. In one patient who previously had had multiple procedures (Fig. 4), threatened implant exposure was treated with soft-tissue imbrication and implant contouring. One patient requested removal of implants 1 month after surgery because he thought that this surgery made too great a change in his appearance. No infections, palpebral fissure distortions, or symptoms of infraorbital nerve damage occurred. Representative patients are presented in Figures 4 through 7.

Globe to orbital rim relations have a wide range of measurements, are influenced by ethnicity and sex, and change with aging. The considerable variability in globe to orbital rim relations is a result of the wide variations in human facial skeleton morphology. Migliori and Gladstone12 determined the normal range of globe protrusion for white and black adults. Using the Hertel exophthalmometer, which measures projection of the anterior surface of the cornea beyond the lateral orbital rim, they found that the range for white adults was 10 mm; for black adults, it was 12 mm. In addition to determining a range of normal values, they documented racial and sexual differences in globe projection. When globe projection was measured relative to the lateral orbital rim, menâ€™s globes, on average, were 2 mm more prominent than womenâ€™s, and black menâ€™s and womenâ€™s globes were 2 mm more prominent than those of white men and white women.
Recently, Pessa et al.3 discovered that the globe-orbital rim relationship changes with age. They studied two groups of individuals, young and old, using three-dimensional computerized tomography. Their findings are summarized in Figure 8. In the youthful face, the cheek fat lies anterior to the cornea and the orbital fat lies slightly anterior to the orbital rim. The anterior projection of the cheek mass beyond the surface of the cornea has been termed a positive vector.13 With aging, the cheek mass tends to lie posterior to the anterior surface of the cornea (now a negative vector), the orbital fat moves slightly anterior, and the infraorbital rim has a significant movement posteriorly. Hence, retrusion of the infraorbital rim with aging will make the eyes appear more prominent by changing globerim relations, and it will significantly impact the appearance of lower lid bags, particularly in those who tend toward maxillary hypoplasia. Pessa et al.3 hypothesized that it was likely that the infraorbital rim retrusion with aging â€œunmaskedâ€ the fat pads and that infraorbital rim augmentation may become an accepted procedure for lower lid blepharoplasty.

Infraorbital rim augmentation at the time of aesthetic blepharoplasty in patients with orbital rim hypoplasia will have not only a â€œbalancingâ€ but also a â€œrejuvenatingâ€ effect on globe-orbit aesthetics. Furthermore, because rim augmentation makes the relation between orbital fat and the neoorbital rim more like that of youth, less orbital fat removal is required, as was the case with the patient presented in Figure 6. The need for little or no fat removal during aesthetic blepharoplasty when also using extended tear trough implants to augment the infraorbital rim was previously pointed out by Flowers.11 Another â€œrejuvenatingâ€ effect of alloplastic infraorbital rim augmentation can be the improvement of the anterior outline at the interface of the lower eyelid and cheek tissue (Fig. 6). Hamra,14 by modifying Loebâ€™s technique,13 achieved the youthful â€œshortlidâ€ > appearance by augmenting the infraorbital rim with intraorbital fat. Hester et al.16 restored the cheeklid interface by combining subperiosteal midface elevation with lower lid blepharoplasty.

The disproportion in globerim relations ‘in all but one of the patients who were operated on in this series was due to maxillary hypoplasia (congenital, iatrogenic, or post-traumatic), and it was clinically obvious in all. Measuring the distance between the anterior surface of the cornea and the infraorbital rim is useful for determining the severity of the deformity and determining the amount of correction necessary to bring patients toward the normal range. Precise, reproducible measurements of the relationship can be done with photoradiography17 and specially designed devices.18,19 These modalities have been used to determine normal values and to plan or evaluate complex periorbital osteotomies performed for craniosynostotic deformities. There are no readily available instruments for accurate, reproducible measurements of this relationship. The Luedde exophthalmometer20 can be used to compare the projection of the globe and the infraorbital rim. 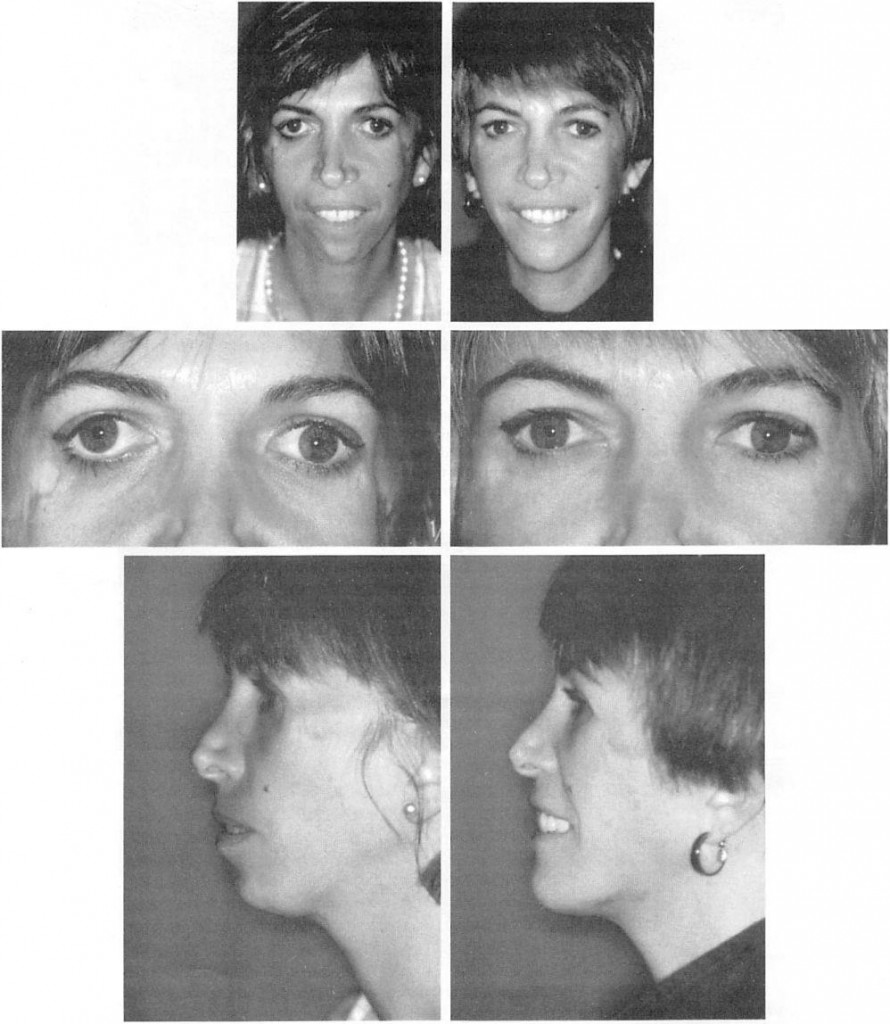 Fig. 4. The first patient treated in this series was a 35-year-old woman with malar and lateral orbital deficiency due to Treacher-Collins syndrome. Silicone implants placed during her teens had been removed because of infection. Rib grafts used to reconstruct the malar and zygomatic area had resorbed, leaving fixation wires visible through thin skin. The zygomatic arch, malar area, and the coloboma of the lateral inf raorbital rim were reconstructed with custom-carved porous polyethylene implants that were fixed with metal screws. Surgery was performed through bicoronal, intraoral, and transconjunctival incisions. In addition, lateral canthopexies and a sliding advancement genioplasty were performed. At 2.5 years postoperatively, an area of implant prominence was treated by imbricating the overlying attenuated soft tissue and contouring the implant prominence. The patient was last seen b years postoperatively and was contacted recently. It has been 9 years since the surgery, and she has had no further surgeries and a stable, satisfactory result. (Left) Preoperative views; (righl) views 2 years postoperatively. (Above) Frontal views; (center) frontal views of orbits; and (below) lateral views. 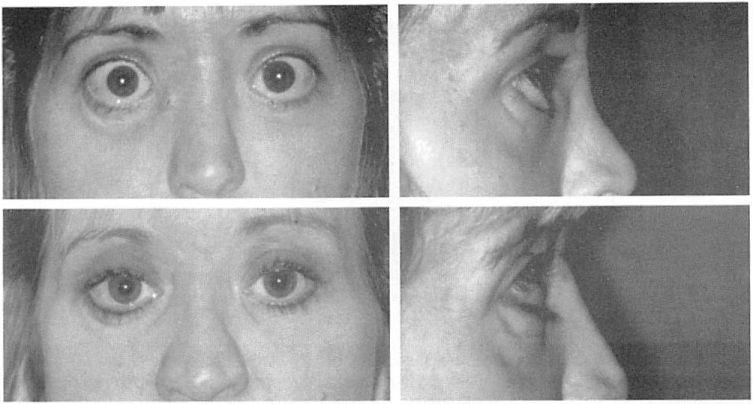 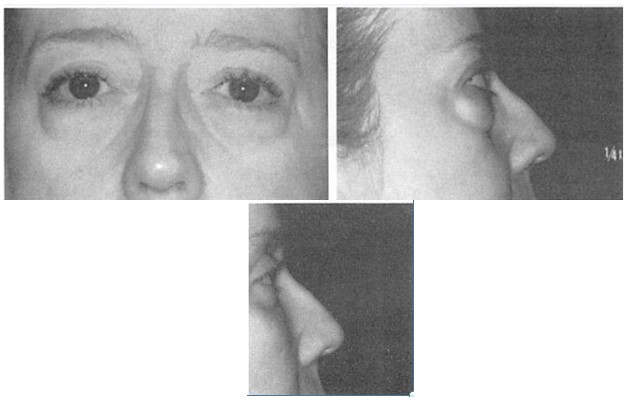 Fig. 6. A 45-year-old woman underwent augmentation of the supraorbital and infraoi’bital rims, an upper and lower blepharoplasty, and a brow lift. Surgery was done through bicoronal and transconjunctival incisions. At 3 months postoperatively, a poor transition between the implant and frontal bone was contoured under local anesthesia. (Above) Preoperative views. (Below) Postoperative view’s at 6 months. (Left) Frontal views. (Right) Lateral views. 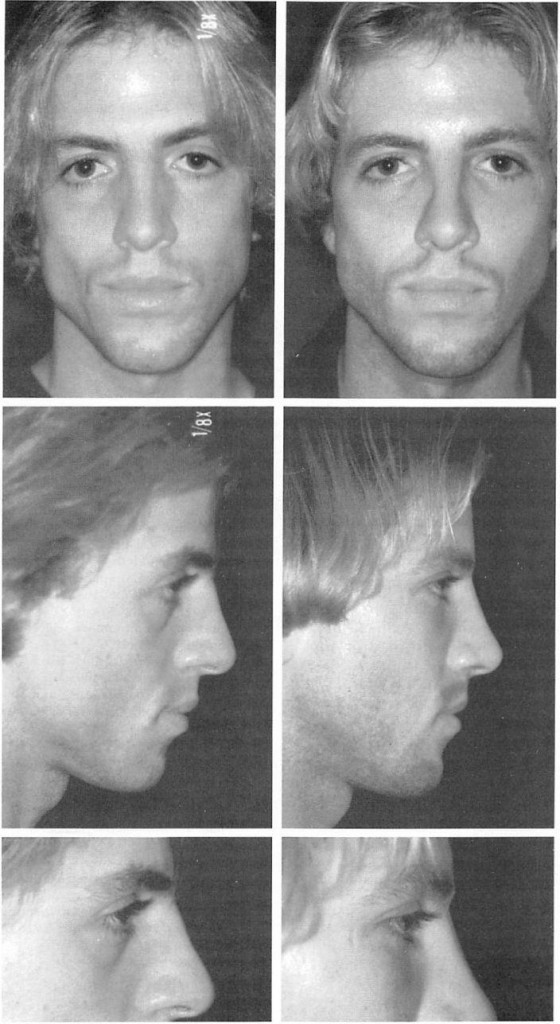 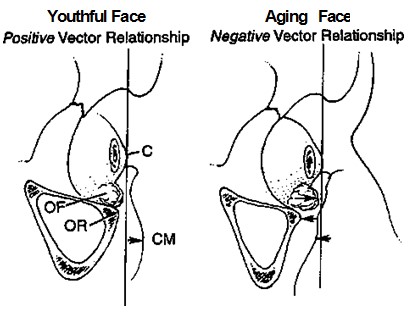 This instrument is a handheld transparent ruler that rests on the lateral orbital rim. The position of the cornea and the infraorbital rim are determined by looking through the ruler at right angles to the surface of the cornea. This technique does not control for parallax. Because this measurement is made as part of a preoperative evaluation and is not intended for serial assessment of disease state, the error associated with parallax is accepted.