The Limited Role of Mathematical Ideals in Planning Facial Surgery

When reconstructing a severely injured face after a motor vehicle accident, the plastic surgeon attempts to return the involved area to its original appearance, or, if that is not possible, to one that is symmetric and accepted as normal. When a patient chooses cosmetic surgery to improve the appearance of their healthy face, the aesthetic goal is more subjective. Because cosmetic facial surgery often results in measurable changes in facial dimensions and proportions, it is intuitively attractive and appropriate to use facial measurements to evaluate the face and to guide surgery. But is there a mathematical equation or set of perfect ratios that define beauty?

Mathematical ideals influenced Classical and Renaissance artists and musicians in their perception of beauty, harmony and hence, their depiction of the human body.

In the first century BC, Vitruvius adapted the proportional concept to the human body. He proposed that the body should be divisible into equal parts, and that all of its units should be expressible in terms of that unit or fractions of the whole. His treatise De architectura which described his proportional system, was one of the few Classical texts which survived to the Renaissance and became highly influential in the thinking of artists and scholars of that time, including Leonardo Da Vinci. Early in his career, Leonardo adopted many of Vitruvius’ ratios. Most of us today associate Leonardo’s anatomic drawings with his rendition of Vitruvius’ ideal proportions for the human body  (c.1490-92) whereby the body when standing with arms stretched fits into a square and, with all limbs splayed, into a circle centered on the navel. 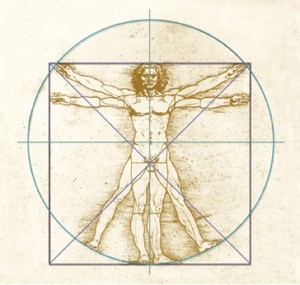 Although usually referenced in textbooks of aesthetic surgery and particularly aesthetic skeletal surgery, neoclassical canons have a limited role in surgical evaluation and planning, Plastic surgeons, similar to Leonardo, have found that they are based on idealizations. When the dimensions of normal males and females were evaluated objectively and compared to artistic ideals, it was found that some theoretic proportions are one of many variations found in healthy normal individuals, or those determined more attractive than normal individuals, and some are never found. The neoclassical canons do not allow for facial dimensions known to differ with sex and age. Most of these canons of proportion such as the ideal that the width of the upper face should be equal to five eye widths – are interesting but hold for few individuals and cannot be obtained surgically or, if obtainable, could be achieved only with extremely sophisticated craniofacial procedures. The difference between a face drawn from idealized proportions and those drawn from averaged dimensions is demonstrated in illustrations A and B, respectively. 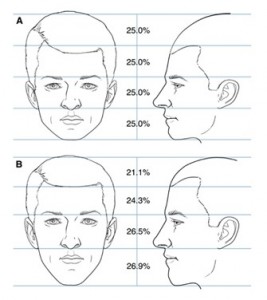 Figure A shows frontal and lateral views of the young adult face constructed with the help of the neoclassical canons. The head and face have five equal vertical sections and four equal horizontal sections. The nose width equals the eye fissure width and the distance between the eyes. Figure B shows Frontal and lateral views of the average young North American Caucasian’s head and face constructed with mean measurements of both sexes. In general, these measurements are different than the idealized ones shown in figure A.

Researchers from various disciplines have emphasized the difficulties with mathematically defining a beautiful face. The renowned orthodontist, Ricketts, pointed out that although the ratio phi, equal to 1.1618 and known as the divine proportion, may be seen in many biologic forms and its approximation may characterize certain relations of the normal human face, it does not distinguish beautiful from plain. The psychologist, Nancy Etcoff analyzed human beauty and its impact on society in a book subtitled, The Science of Beauty – Survival of the Prettiest.  She also found that the perception of beauty could not be defined by mathematical formula writing. For scientists in this century, the key to understanding human beauty is in our biology, not in mathematics.