Abstract. Inadequate projection of the midface skeleton results in midface concavity. Patients with this skeletal morphology tend to have prominent eyes and noses. Lack of skeletal support for the midface soft tissue envelope predisposes to premature cheek descent, resulting in palpebral fissure distortion and lower lid â€œbags,â€ an appearance of early aging. Concave midfaces can be made convex with two basic maneuvers performed through intraoral and periorbital incisions. Midface skeletal projection can be increased by augmenting the facial skeleton with alloplastic implants. Multiple implants are required to replicate the complex curvature of the midface skeleton and to avoid impingement on the infraorbital nerve. Subperiosteal elevation of the midface soft tissues and repositioning provides cheek fullness and narrows the palpebral fissure while masking eyelid â€œbags.â€ The resultant midface concavity makes the eyes and nose appear less prominent. This procedure has been a safe and effective treatment for 14 patients treated over a 4-year period.

Severe midface concavity often is seen with the craniofacial dysostoses of Apert and Crouzon. It not only may result in occlusal disharmony, but also may compromise globe protection and airway adequacy. Patients with this morphology require skeletal osteotomies usually at the LeFort III and sometimes at the LeFort I level to remedy ocular, respiratory, and occlusal dysfunction and to improve facial aesthetics.

Less severe midface hypoplasia is a common facial skeletal variant [8]. In patients with this morphology occlusion is normal or has been compensated by orthodontics. They have neither respiratory nor ocular compromise. It is in this population that midface skeletal augmentation with multiple implants can simulate the visual effects of skeletal osteotomy and advancement (Fig. 1).

This report describes the surgical technique for transforming a concave face to a convex face with multiple implants and a subperiosteal midface soft tissue resuspension. It has been safe and effective for a series of 14 patients over 4 years.

A diagrammatic overview of the operation is presented in Fig. 2. Access to the midface skeleton is obtained through lower lid and intraoral incisions. The entire midface is freed in the subperiosteal plane. The midface skeleton is augmented with a combination of porous polyethylene implants immobilized 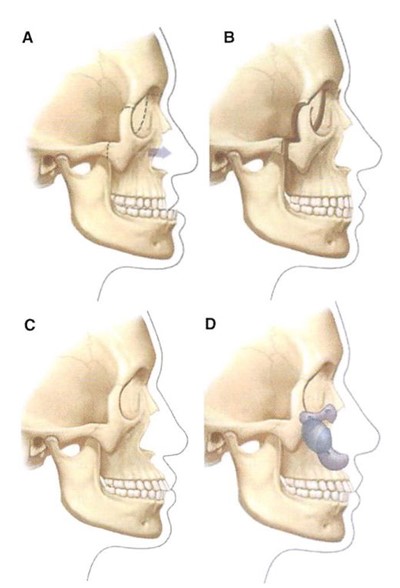 with screws. The midface soft tissue envelope is elevated and fixed with sutures tied to the infraorbital rim, implant, and/or the lateral orbital rim.

Incisions
For accurate positioning of the infraorbital rim implant, a combination of periorbital and intraoral

Fig. 2. Diagrammatic representation of surgical procedures. Broken lines indicate access to midface skeleton. Infraorbital rim, paranasal, and malar implants are applied to the midface skeleton. They are immobilized with titanium screws. The implants are custom contoured to the specific needs of the patient and to provide imperceptible implantnative skeleton and implant-implant transitions. The midface soft tissue envelope, which has been freed by subperiosteal dissection, is elevated and secured by sutures to the rim implant or the orbital rims.

incisions is used. So as not to distort palpebral fissure shape, it is my preference to avoid, if possible, violation of the lateral canthus as well as delamination and relamination of the lower lid.

For that reason, a transconjunctival retroseptal incision alone or in combination with the lateral extent of the lower lid blepharoplasty incision is preferred for access to the upper midfacc skeleton. The entire midface skeleton including the zygomatic arch is separated from its overlying soft tissues by subperiosteal dissection.

Usually, three implants are required to increase the projection of the midfacc skeleton, to mimic its contours, and to avoid impingement of the infraorbital nerve. The most important implant is one specifically designed to augment the projection of the infraorbital rim [18]. This implant can provide up to 5 mm of anterior projection. It is trimmed to meet the specific needs of the patient. A small flange allows it to rest on the most anterior aspect of the orbital floor. This flange allows easier positioning of the implant and a possible area for screw fixation to the skeleton. A paranasal implant [21] has been designed to augment the piriform aperture. Usually, implants are carved 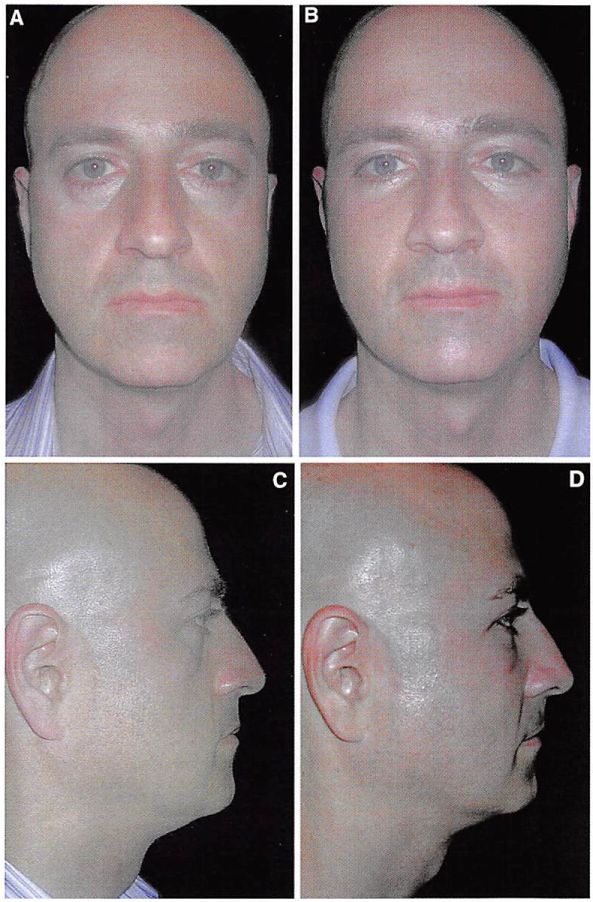 from a malar design to augment the area below the lateral aspect of the rim implant and the area lateral to the paranasal implant. All implants are immobilized with titanium screws. The implants are trimmed so that there are imperceptible transitions between the implants and the native skeleton.

A suction drain is placed between the implants and the overlying soft tissues. It usually exits from theÂ temporal scalp. The transconjunctival incision is approximated but not sutured. The intraoral incision is closed in two layers. A temporary tarsorrhaphy suture often is placed to minimize chemosis. The patient is administered intravenous antibiotics intraoperatively and an oral antibiotics for 5 days postoperativcly.

This procedure has effectively transformed concave faces to convex faces for 14 patients (8 men and 6 women) over a 4-year period. Their average age was 41 years (range, 27-56 years). There have been no infections. Two patients required revision of implant shape to improve symmetry. Most patients have altered sensation in the infraorbital distribution for 2 to 12 weeks after surgery. Patients who have undergone this surgery are shown in Figs. 3 to 6. 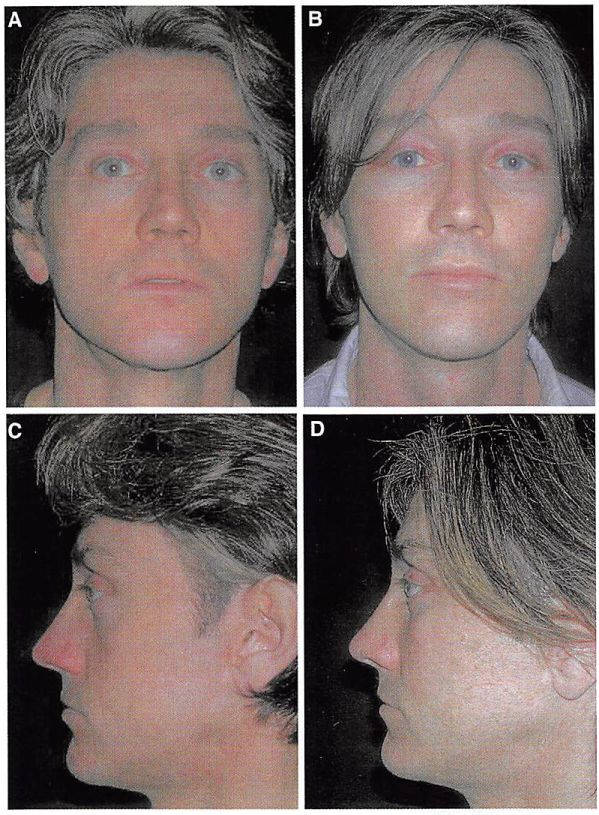 Fig. 4. Preoperative and postoperative viewsÂ of a 47-year-old man who had placement ofÂ multiple midface implants and midface elevation. Rhytidectomy, upper and lower lidÂ blepharoplasty, and a brow lift had beenÂ performed by other surgeons in the past.

Patients with midface concavity have an underlying deficiency in maxillary and zygomatic skeletal projection. Ptosis of the cheek and lower lid is accelerated by the lack of skeletal support in this patient population. Facial skeletal augmentation with multiple-screw-fixed alloplastic implants, together with subperiosteal midface soft tissue elevation, can normalize and enhance the appearance of these patients. The technique described in this report is effective and avoids problems inherent to other methods used to produce midface convexity.

If skeletal midface deficiency is accompanied by class 3 malocclusion, LeFort osteotomy (sometimes at two levels) is required to normalize occlusion and to improve globe-rim relations [4,10]. In skeletally deficient patients whose occlusion is normal or has been previously normalized by orthodontics, skeletal repositioning would necessitate additional orthodontic tooth movement. Such a treatment plan is time consuming, costly, and potentially morbid. It is, therefore, appealing to few patients.

The projection of the midface skeleton can be increased by augmenting it with autogenous bone or alloplastic materials. Aesthetic skeletal augmentation is rarely done with autogenous bone because of the unpredictability of the result. Once the graft is revascularized by the host, it becomes subject to osteoclastic activity [2], as determined by mechanical load and soft tissue deforming forces (Wolffâ€™s law). In addition, graft harvest is painful and time consuming. It increases both operating time and recovery time and therefore increases cost. Alloplastic augmentation of the facial skeleton avoids the unpredictability and morbidity inherent in the use of autogenous materials.

I prefer to augment the concave midface skeleton with multiple implants of porous polyethylene fixed with screws. Multiple implants allow precise adaptation to the complex and unique curvatures of each facial skeleton. Furthermore, they allow the operator to avoid implant impingement on the infraorbital nerve that would be inevitable with a single large implant.

Porous polyethylene implants are preferred over smooth surfaced implants for several reasons. TheÂ material properties of these implants allow them to be easily carved and immobilized with screws. 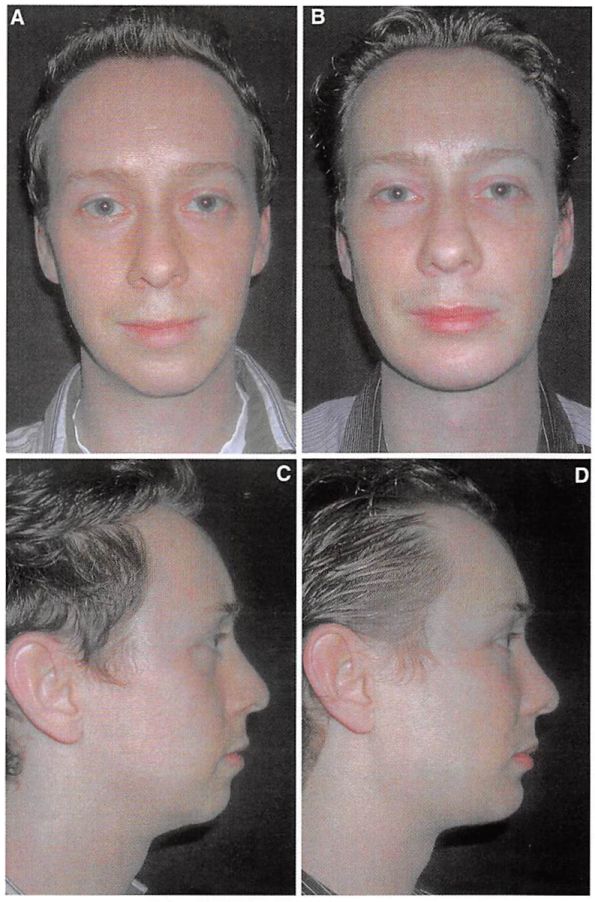 Fig. 5. Preoperativc and postoperative views of a 28-year-old man who underwent multiple midface implants and midface elevation. During the same operation, chin and mandible implants were placed, and the vertical height of the chin was reduced.

The implants are fixed with screws for the following reasons. Screw fixation immobilizes the implants. This eliminates any intra or postoperative implant movement and subsequent undesirable contour. Their rigid immobilization allows the implants to be contoured â€œin placeâ€ so that there is an imperceptible transition between the implant and the skeleton. Finally, screw fixation allows the posterior surface of the implant to be applied to the anterior surface of the facial skeleton, thereby obliterating any gaps between these two surfaces. Gaps result in an unanticipated increase in projection equivalent to the gap space. 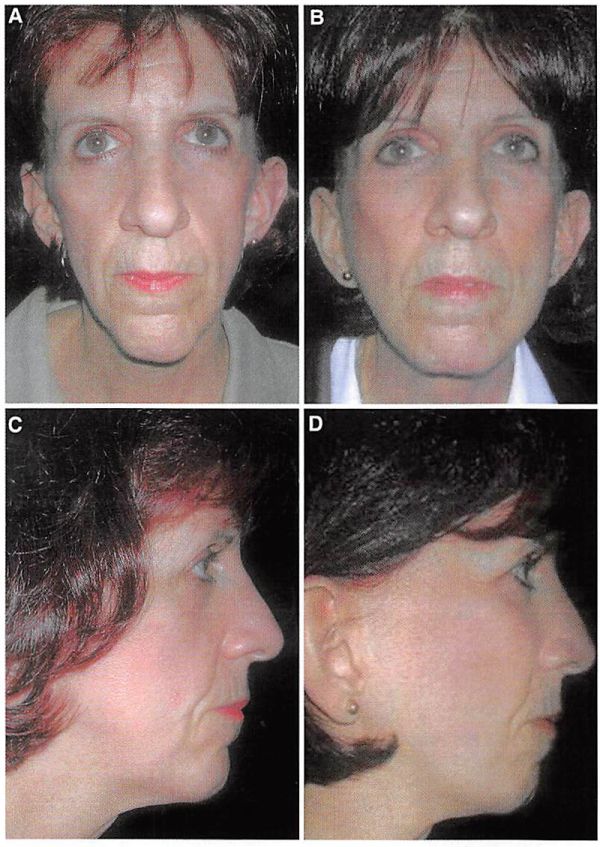 Fig. 6. Preoperative and postoperative views of a 50-year-old woman who underwent multiple midface implants and midfacc elevation. In addition, a lateral canthopcxy and mandibular body and angle implants were placed. In the past, the patient had undergone upper and lower lid blcpharoplasty as well as chin augmentation performed by other surgeons.