Patients with satisfactory occlusion and lower midface concavity can have their aesthetic desires satisfied with skeletal augmentation. Appropriate implant augmentation in the paranasal area can simulate the visual effect of LeFort I advancement and other skeletal manipulations.

Since the majority of Caucasian faces are convex, midface concavity is often considered less attractive. Augmentation of the pyriform aperture area is usually performed to move the lower midface profile from one of concavity to relative convexity. 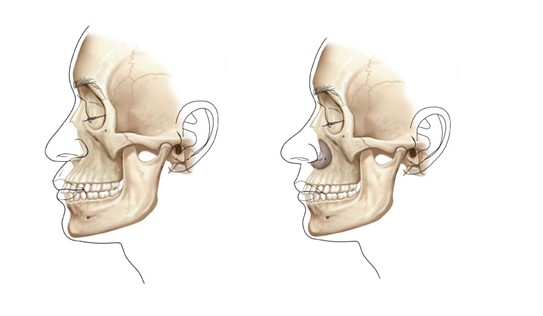 Pyriform aperture (or paranasal) implants are available from Matrix Surgical. They are designed as right and left crescents and come in two sizes. The smaller implant is 27 mm long by 25 mm high and provides 4.5 mm of projection. The larger implant, which is30 mm long by 28 mm high, provides 7 mm of projection. These implants are designed to be tailored to the patientâ€™s particular aesthetic needs. The implant is positioned to sit flush on the bone. The patientâ€™s anatomy will determine whether the entire crescent or just the horizontal or vertical limb of the crescent will be used. (Figure 8-4)

A deficiency in lower midface projection is common in patients with surgically corrected clefts.Â  Both the alteration of soft tissue skeletal relationships during surgical repair and the growth-retarding forces of scarring are believed to restrict palatal and maxillary growth after cleft repair. 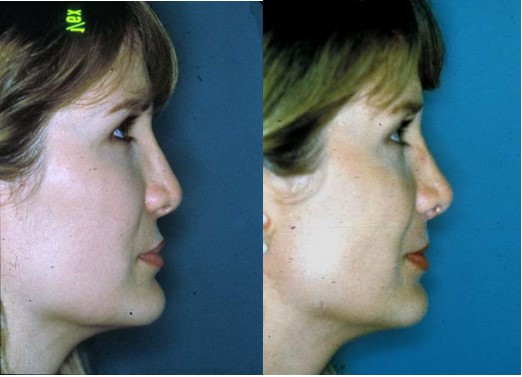 Patients who have been treated for extensive midface or panfacial fractures may present with relative midface deficiency but normal occlusion. This â€œdish faceâ€ deformity occurs when pre-injury maxillary anatomy is not restored or not maintained. Retrusion of the lower midface may occur when upper and lower jaw fractures are reduced with respect to occlusion only and not to pre-injury three-dimensional skeletal anatomy above the occlusal level. It may also occur after comminuted maxillary fracture reduction and fixation if the surgery is inadequate to resist soft tissue deformity forces accompanying massive edema. As shown below, paranasal augmentation can help restore the pre-injury contour . 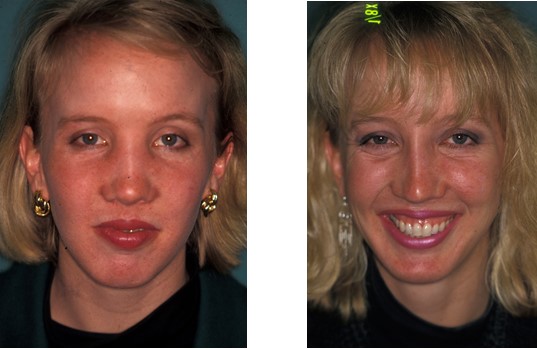 Another major group of patients is made up of people who were born with relative midface lower deficiency. These facial skeletal characteristics are noted more commonly in certain ethnic groups, including Asians and blacks, in whom relative maxillary hypoplasia can result in concave midface profile. Pyriform aperture augmentation often benefits those patients during rhinoplasty where, depending on implant placement, it can increase the projection of the nasal base, efface the acute nasolabial angle and straighten the vertical plane of the lip. The patient shown below had nasal aesthetics improved with pyriform aperture augmentation without rhinoplasty