Aging results in soft tissue descent with rounding of the palpebral fissure, lengthening of the lower lid, and a loss of cheek prominence. In patients with skeletal deficiency (midface concavity), these signs of aging are early and exaggerated. These skeletally deficient faces are also â€œmorphologically proneâ€ to further lower lid descent after blepharoplasty .

Recent data support the concept that the aging process not only causes soft tissue atrophy leading to volume depletion in the periorbital and midface area, but also a loss of projection of the midface skeleton . 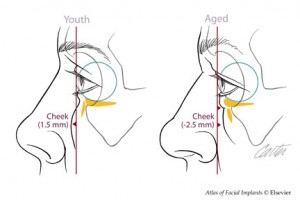 This diminution in projection would hasten the gravitational induced descent of their overlying and now, less supported soft tissue envelope in both convex and particularly, concave faces.

Augmentation of the midface skeleton with alloplastic implants can bring convexity to deficient areas of the midface. The implant that has the biggest impact on periorbital aesthetics is one that augments the infraorbital rim . By changing globe-rim relations, it transforms the â€œnegative vectorâ€ of upper midface concavity to the â€œpositive vector of upper midface convexity. 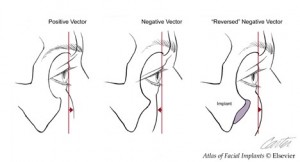 This implant may be used alone, or in combination with implants which augment the piriform aperture and the malar areas. Infraorbital rim augmentation is routinely accompanied by subperiosteal midface resuspension. Elevating midface soft tissues has several benefits. It restores cheek fullness, shortens the lower lid and narrows the palpebral fissure.

Alloplastic augmentation of the midface skeleton combined with subperiosteal midface resuspension has improved periorbital and midface aesthetics in patients who lack midface convexity. With the addition of lateral canthopexy it can restore palpebral fissure shape in morphologically prone patients with lower lid malposition after blepharoplasty. 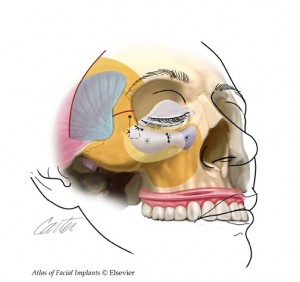 A diagrammatic overview for augmentation of the infraorbital rim and subperiosteal midface elevation is presented is presented here. Â Access to the midface skeleton is obtained through lower lid, intraoral incisions and, if appropriate, temporal (or bicoronal) incisions.Â  The entire midface is freed in the subperiosteal plane.Â  The infraorbital rim is augmented with a porous polyethylene implant immobilized with screws. The midface soft tissue envelope is elevated and fixed with sutures tied to the infraorbital rim implant.Â  Â A bridge of bone canthopexy is performed when it is necessary to reposition the lateral canthus and to provide additional support for a repositioned lower lid.

Traditional concepts of periorbital and midface aging and rejuvenation focus on the soft tissues. Recently, senescent changes in the supporting facial skeleton been investigated. Findings in these studies revealed retrusion of the midface skeleton and support the concept of alloplastic augmentation of the midface skeleton as part of the algorithm for periorbital and midface rejuvenation and enhancement.

Senescent changes to the soft tissues are apparent and therefore have been the focus of periorbital and midface rejuvenative surgery. The traditional belief of how facial appearance changes with age centered on the development of a lax skin envelope that becomes ptotic under the influence of gravity. Recent studies have challenged this concept and introduced a number of components and mechanisms (some contradictory) as contributing to periorbital and midface aging. Â Lambros has demonstrated through closely matched images taken of an individual over time that descent probably does not play as large a role in the aging process as previously thought. Coleman advocates the role of fat atrophy in contributing to the volume loss and sagging of the soft tissue envelope. In contrast, Gosain Â in an MRI study of the cheek fat pad concluded the changes in the midface were related to a combination of hypertrophy and ptosis.Â  Most recently, Le Louarn Â postulated that the facial muscles are the predominant factor in the aging process. In his paper he concludes that the repeated motion of the facial musculature results in a redistribution of the facial fat over time creating the aged face. These conflicting hypotheses and data suggest that changes that occur to the facial soft tissues with time and manifest as the aging face may be a mix of addition, subtraction and redistribution.

Controversy also exists as to how the facial skeleton changes with aging. Some early investigators thought that the craniofacial skeleton grew until skeletal maturity and then became stable. Other early investigators believed that the facial bones continued to remodel throughout life. More recently Bartlett et al in their analysis of skulls from the Smithsonian concluded that the skeleton expanded with age. But in their subjective analysis of facial form they noted a general coarsening of bony protuberances at the site of facial musculature origin form the bone and a general softening in the areas of bone with no muscle attachment. It was also noted that facial height decreased as a result of tooth loss and the subsequent loss of alveolar bone

Pessa and colleagues furthered the concept that the facial skeleton continues to change throughout life. The collective studies of Pessa have demonstrated that changes occur with age along the inferior orbital rim. The rim moves relatively posterior to the anterior cornea as well as undergoing progressive curve distortion particularly in the infero-lateral aspect.Â  Pessaâ€™s studies in the midface also confirm that the craniofacial skeleton continues to undergo differential changes with age. Shaw and Kahnâ€™s recent work reinforces Pessaâ€™s findings that the midface skeletal structures retrude with age relative to the upper face. It is interesting to note that the implants presented here match the areas of skeletal change found in these studies.

Levineâ€™s analysis of Behrents Atlas of Growth in the Aging Craniofacial Skeleton, indicated to him that facial bone growth continues throughout adulthood. He concluded that it is soft tissue descent and volume loss that leads to the associated changes of aging. Furthermore, he believes that the negative vector eyelid or polar bear appearance seen in some individuals is the result of a horizontal maxillofacial deficiency present throughout life that is unmasked by the soft tissue changes of aging. Levine contends that Pessaâ€™s, as well as Shaw and Kahnâ€™s, cohort comparison studies using statistical analyses of three dimensional images are unsound becauseÂ  they are not longitudinal, that is, they do not study any one individual over time. Pessa countered that Levineâ€™s longitudinal analysis of cephalometric tracings is unsound because it is based on angular measurements which can be interpreted in different ways depending on the point of reference.

Â Â Â Â Â Â Â Â Â Â Â Â  Both the soft tissues and the skeleton contribute to midface contour and both components are impacted by the aging process. Hence, both soft tissue and skeletal augmentation can be appropriate to restore midface convexity. However, these modalities are not equivalent in their impact on the appearance of the midface.Â  Free fat grafting and the injection of various fillers is intuitive for the restoration of soft tissue volume loss due to senile atrophy.Â  It has a limited role in simulating the effect of an increase in skeletal projection.Â  Whereas augmenting the facial skeleton results in an increase in the projection of the skeleton, augmenting the soft tissue volume results in an inflation of the soft tissue envelope and blunting of the contours of the skeleton.Â  Over augmentation of either component brings home the point. If overly large implants were placed on the skeleton, the appearance would be too defined and ultimately, skeletal.Â  If too much fat were placed in the soft tissue envelope, an increasingly spherical and otherwise undefined shape would result.

Augmentation of the infraorbital rim with alloplastic implants provides convexity to the upper midface skeleton. Together with lower lid and midface soft tissue suspension, it creates or restores youthful periorbital aesthetics. Infraorbital rim augmentation together with midface resuspension and lateral canthopexy can be effective in treating post-blepharoplasty sequellae in the negative vector patient.