The upper midface skeleton has direct and indirect influences on the appearance of the face and particularly, the eyes. The relationship between the eyeball and the orbital rims will determine if the eyes appear prominent or deep set. Because the infraorbital rim ( the bone directly beneath the eye) and upper midface skeleton support the lower eyelids and the cheek soft tissues, their projection impacts on lid and cheek position. Patients with poorly projecting midface skeletonsare more likely to undergo premature lower lid and cheek descent with aging. This lack of skeletal support predisposes to lower lid malposition after blepharoplasty and limits the efficacy and longevity of midface lifting. Augmenting the infraorbital rim alone, or together with other soft tissue manipulations, can have a powerful effect on periorbital appearance.

The relationship of the globe to the orbital rims is a primary determinant of the appearance of the upper third of the face.Â  Normal values are shown in the figure. 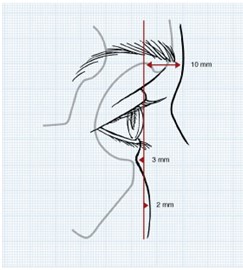 Pessa et al. (Aesthetic Plast Surg.Â  23:337, 1999.) showed that the globe-orbital rim relationship changes with age. They studied two groups of individuals, young and old, using three-dimensional computerized tomography.Â  Their findings are summarized in the figure below. 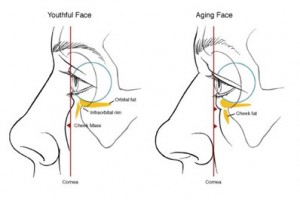 In the youthful face, the cheek fat lies anterior to the cornea and the orbital fat lies slightly anterior to the orbital rim.Â  With aging, the cheek mass tends to lie posterior to the anterior surface of the cornea, the orbital fat moves slightly anterior, and the infraorbital rim has a significant movement posteriorly.Â  Hence, retrusion of the infraorbital rim with aging will make the eyes appear more prominent by changing globe-rim relations, and it will significantly impact the appearance of the lower lid bags, particularly in those who have poorly projecting midface skeletons.

The relative prominence of the eyes impacts on the position and shape of the lower lid and therefore it is an important consideration in aesthetic blepharoplasty.Â  Plastic surgeons have long recognized the patients with prominent eyes are predisposed to the lower lid descent which may be exaggerated and symptomatic after conventional blepharoplasty.Â  Eye prominence results from a deficiency in skeletal support as has been discussed, but may also result from excess of orbital soft tissue volume.Â  Eye prominence correlates with a more inferior position of the lower lid (resulting in scleral show) and a more medial position of the lateral canthus.Â Â  Descent of the lower lid increases the height of the palpebral fissure while the more medial position of the lateral canthus decreases its width.Â  Hence, patients with poorly projecting upper midface skeletons have â€œround eyesâ€ as compared to the long narrow eyes characteristic ofÂ  young people with a normal periorbital morphology.Â  Furthermore, in the skeletally deficient, the lack of infraorbital rim projection and cheek prominence often allows their lower lid fat compartments to be visible â€“ giving them â€œearly bagsâ€

Patients with prominent eyes have long been recognized to develop symptomatic lower lid descent (with exaggeration of their â€œround eyesâ€) after conventional lower blepharoplasty.Â Â  Jelks categorized globe-orbital rim relationships and the tendency for the development of lower lid malposition after blepharoplasty. 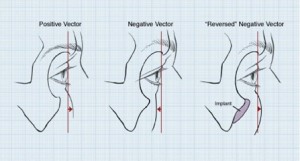 Augmenting the orbital rim with implants is part of the strategy for normalizing the appearance in patients who have a negative vector.Â  It can be adapted for â€œnegative vectorâ€ patients who are first seeking improving in their periorbital appearance or for those whose lid malposition and round eye appearance have been exaggerated by previous lower blepharoplasty.

Patients with hypoplastic orbital rims tend to age prematurely.Â  The deficiency in skeletal support for the lower lid and midface soft tissues results in their early descent with concomitant rounding of the palpebral fissure and absence of a distinct cheek-lid interface. Patients with this facial skeletal morphology are prone to further lower lid descent, which is often symptomatic, after blepharoplasty.Â  A treatment for lower lid retraction after blepharoplasty in negative vector patients has received little attention in the literature.

The periorbital appearance of patients with hypoplastic infraorbital rims (â€œmorphologically proneâ€, â€œnegative vectorâ€) can be normalized with a procedure that combines infraorbital rim augmentation, subperiosteal midface elevation, and, if necessary, lateral canthopexy. An alloplastic implant increases the sagittal projection of the infraorbital rim, effectively reversing the negative vector.Â  The implant provides support for the cheek and lid tissues. The midface elevation repositions the descended cheek and recruits lower lid tissue as shown in the cross-sectional image below.

A lateral canthopexy repositions the lateral canthus and provides additional support for the lower lid. This operation can be adapted for morphologically prone patients who are first seeking improvement in their periorbital appearance or for those whose lid malposition and round eye appearance have been exaggerated by previous lower blepharoplasty.

The patient shown below had her negative vector reversed with an infraorbital rim implant and a subperiosteal midface lift. Note the increased projection of the midface.