The Safe Midface Augmentation with Anatomic Landmarks for the Infraorbital Foramen

Introduction: Midface augmentationÂ is routinely used for aesthetic improvement of concave faces while providing a balanced and harmonious contour to the face. It can also be used as an adjunct to orthognathic and reconstructive surgery. An injury to the infraorbital nerve as it exits the infraorbital foramen (IOF) can result in significant morbidity to patients. It presents as a transient or permanent loss of sensation to the midface, nasal sidewall, upper lip, and lower eyelid. The purpose of this study is to identify a safe zone of dissection in the midface for subperiosteal placement of infraorbital, paranasal, malar, and submalar implants while reliably avoiding injury to the infraorbital nerve.

Methods: Given the routine use of transconjuctival and intraoral incisions for access to the midface skeleton, various CT views and 3D models were reviewed in order to identify relevant bony and dental landmarks. Forty-four CT scans of adult hemi-faces were identified. There were 22 males and 22 females in the study, with an average age of 31 years (range from 18 to 45). CT scans were then used for accurate location of the IOF in relationship to our anatomic landmarks.

Results: The location of the IOF correlates most frequently with 2nd premolar on a vertical axis. The average distance between the IOF and the infraorbital rim, the piriform aperture, and the tip of the 2nd premolar cusps is approximately 8.61 mm, 17.43 mm, and 41.81 mm, for males, and 8.25 mm, 15.69 mm, and 37.33 mm, for females, respectively.

Conclusion: A safe zone of dissection for midface augmentation is identified in this study, which does not correlate accurately with previous cadaveric or skull measurements. This may reflect the relatively young age of patients in our study as compared to the findings in published cadaveric measurements. We believe that this zone can greatly assist clinicians in identifying the location of the IOF and avoid injury to the nerve as dissection proceeds from a transconjuctival and an intraoral approach towards the IOF.

Â Midface augmentation with alloplastic implants is a common cosmetic procedure with an estimated 8,789 cheek implants procedures in 2009.1 Placement of malar, submalar, or paranasal implants requires intimate knowledge of the anatomy of the midface and the infraorbital foramen. Damage to the infraorbital nerve carries a significant morbidity with numbness to the upper lip, nasal sidewall, lower lid, and midface of the affected side.2 It is difficult to ascertain the exact incident of hypoesthesia following implant placement,3,4 but it is likely that such injuries are underreported in the aesthetic literature. In one study of secondary malar implant surgery, 23% of the patients who sought revision surgery complained of dysesthesias following initial implant placement.5

In an effort to prevent these complications, most surgeons rely on experience in order to identify the infraorbital nerve. Moreover, there have been several attempts to identify the infraorbital foramen based on soft tissue landmarks.2,6 The purpose of this study is to define a safe zone of dissection in the subperiosteal plane, while avoiding an injury to the infraorbital nerve based on bony and dental anatomical landmarks. (Fig. 1) Given the routine use of a transconjuctival and an intraoral incisions for our midface augmentation, anatomic landmarks were chosen based on a bidirectional approach.5,7-9

In our study, forty-four spiral CT scans of adult hemi-faces were reviewed (22 males and 22 females). All scans were performed using a standard exposure and patient positioning protocol. The mean age was 31 years with a range from 18 to 45 years. Our exclusion criteria consisted of patients who sustained any midface fracture, bony malformation, or maxillary dental irregularities. Patients younger than 18 years or older than 60 years were excluded as well. Sagittal, axial, and coronal views, as well as 3D reconstruction models were analyzed in order to obtain distance measurements from the IOF.

Â The following bony and dental landmarks were identified for the IOF: the infraorbital rim, the cusps of the second premolar, and the piriform aperture. The GE Healthcare software â€œVolume Viewerâ€, version 10.3.67, was utilized in order to obtain our distance measurements. (Fig. 2) A student t test was used to analyze the differences between our male and female groups for each landmark.

Â The location of the IOF correlates most frequently with the 2nd premolar on a vertical axis. The average distance from the IOF to the infraorbital rim, the piriform aperture, and the tip of the 2nd premolar cusps, is approximately 8.61 mm, 17.43 mm, and 41.81 mm, for males, and 8.25 mm, 15.69 mm, and 37.33 mm, for females, respectively. The values of the anatomic landmarks that were measured are listed in Table 1. (Fig. 3)

Multiple previous studies have been described to assist clinicians in identifying the location of the IOF for trigeminal nerve blocks, orthognathic surgery, and reconstructive surgery.11-23 In our review of the literature, various soft tissue and bony landmarks were described for the IOF. These include the mid pupil,2 the nasal ala,11 the cheilion (mouth corner),11 the piriform aperture,5,12,16,18,21,24 the inferior orbital rim,11-23 the canine,21 the 1st pre molar,11,25 and the 2nd pre molar tooth.2

We identified inconsistencies in the measurements among various studies, as well as between males and females (Table 2, 3, 4). The majority of these studies were performed on dried skulls, photographs of dried skulls, or cadaveric specimens. Although the average age of these skeletal specimens was not recorded, it is likely that they were of older age. These distances from the IOF to the anatomic landmarks were in most cases smaller than our measurements, perhaps because of the age related changes of the facial skeleton.

The clinical relevance of our study is the young age of our study group, which is usually the common denominator among facial augmentation patients. The importance of facial skeletal aging in relationship to midface augmentation procedures is demonstrated in recent analysis of facial skeletal aging studies.26-28 Several authors illustrated the significant increase in orbital aperture,27 the decrease projection of the midface region,26 and the decrease in facial height27 as a dynamic process of facial bone loss. If all of these variables change with time, the use of measurements from dried cadaveric studies may not be as relevant as the data presented in this study.

Our surgical access to midface augmentation relies mainly on transconjuctival and intraoral approaches.9,29,30 The transconjuctival and buccal incisions are well tolerated by patients, avoid external scarring, and facilitate excellent exposure to the zygomatic and maxillary bones. However, with the absence of proper bony landmarks, it is difficult for the novice surgeon to identify the location of the IOF and prevent injury to the infraorbital nerve. Dissection in the subperiosteal plane can be even more challenging when no soft tissue landmarks could be relied upon. (Fig.1) We recommend the use of high magnification, proper lighting, and excellent hemostasis in order to maximize the visualization of the bony surface anatomy. Moreover, the use of dental and skeletal landmarks can guide the surgeon when operating via small incisions through the lower eyelid and the oral mucosa. The suggested zone of safety is particularly relevant when considering the difference among males and females, as shown in our results (Table 1).

Â We also emphasize the need to measure from each anatomic landmark to the outer margin of the IOF in order to avoid entering a danger zone as dissection proceeds inferiorly through a transconjuctival incision or superiorly via a gingivobuccal sulcus incision. (Fig. 4)

Â In conclusion, the infraorbital rim, the piriform aperture, and the tip of the 2nd premolar cusps are reliable anatomic landmarks that allow us to define a safe zone of dissection in the midface. We recommend the use of these measurements as they are relevant for both male and female patients, and we hope that they will aid surgeons in avoiding significant morbidity following any midface augmentation procedure.

Â Figure 1. Illustration of an intraoral approach demonstrates the difficulty in identifying the infraorbital foramen in the absence of proper anatomic landmarks. 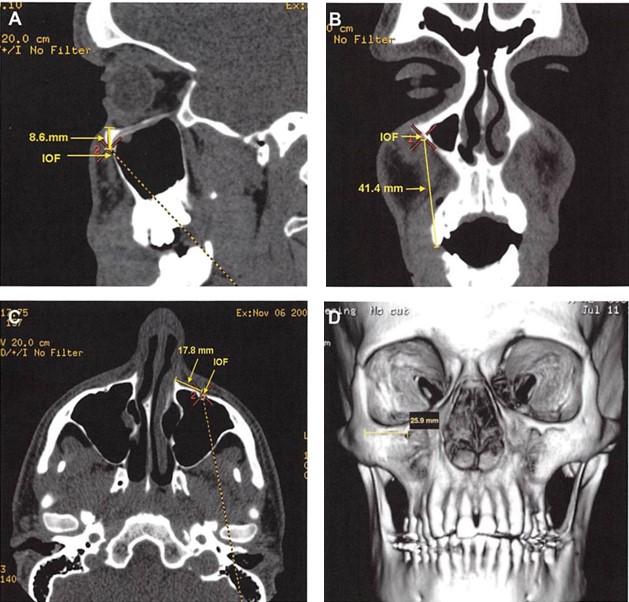 Figure 2. (A) Sagittal, (B) axial, (C) coronal, and (D) 3-dimensional views show distance measurements from the infraorbital foramen (IOF) to the anatomic landmarks. 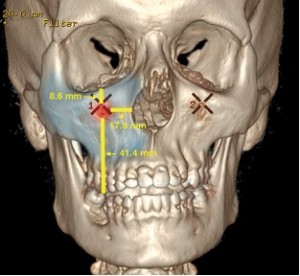 Fig. 4. The ability to predict the location of the IOF based bony and dental landmarks.

Â Table 1. Measurements from the IOF to our anatomic landmarks.

Table 2. A comparison of reported measurements from the IOF to the IOR.

Table 4. A comparison of reported measurements from the IOF dental anatomical landmarks.