Middle-aged and elderly patients frequently require reconstruction and repair of cartilage structures in the face, neck, and joints.1 Although autogenous tissue grafting andÂ insertion of prostheses have been used successfully, these therapies cause morbidity to the patient dueÂ to donor-site harvest and/or extrusion of the prosthesis postoperatively.2,3 In addition, the lack of readily available autologous donor tissue (cartilage) limits the spectrum of these therapeutic approaches. The concept of tissue engineering is one of the most promising avenues for creating suitable tissue for repair and regeneration.1â€™4-5 Using small cartilage biopsy specimens to isolate and expand cells in culture, tissue-engineering techniques could be used to produce large pieces of neocartilage to augment or replace deficient tissue in the recipient, while at the same time significantly reducing donor-site morbidity.

Cartilage Harvest and Cell Isolation
All procedures involving animals were approved by the Institutional Animal Care and Use Committee of the Massachusetts General Hospital following the National Institutes of Health Guide for the (Care and Use of Laboratory Animals. Articular cartilage was aseptically harvested from the knees, hips, and shoulders of 8-year-old sheep (n = 4) and 3- to 6-month-old sheep (n = 6). Articular cartilage was dissected sharply from the underlying bone. Native articular cartilage samples were collected and set aside as controls. The cartilage chips were washed twice with phosphate-buffered saline (Sigma Corp., St. Louis, Mo.) containing 1% antibiotic antimycodc (Sigma) and minced into 1- to 2-nnn fragments under sterile conditions. Articular cartilage was digested with 0.1 w/v% collagenase type II (Worthington, Freehold, N.J.) for 12 to 18 hours at 37Â°C. After digestion, chondrocytes were rinsed and washed twice with phosphate-buffered saline. Cell number and viability were determined using the trypan blue exclusion dye testÂ Assembly and Implantation of Chondrocyte/ Fibrin Gel Polymer Constructs

Articular chondrocytes from both old and young donors were suspended in Fibrinogen (Sigma) solution. This solution was mixed with an equal volume of thrombin (0.15 ml each; JPI Jones, Middleton, Wis.) in individual 48-well plate chambers until polymerization to form 0.3-ml volume samples each containing 13.3 X I()() cells. Samples made with chondrocytes from both old and young donors were arranged in three groups: unimplanted (n = 8), implanted 7 weeks (/? = 8), and implanted 12 weeks (n = 8). Unimplanted group samples were stored at â€”80Â°G for later analysis for baseline biochemical content. Seven- and 12-week group samples were implanted into the subcutaneous tissue of the backs of nude mice (Massachusetts General Hospital, Boston, Mass.; four samples per animal, eight samples per group). The samples implanted in each mouse were from the same group and donor age. Samples were harvested after 7 and 12 weeks. Both unimplanted and samples implanted for 7 and 12 weeks were randomly selected and processed for either histological examination (n = 2) or biochemical analysis (n = 6). Samples assigned to biochemical analysis were stored at â€”80Â°C until needed for processing.

After fixation with 10% phosphate-buffered formalin for 24 hours, specimens were embedded in paraffin and sectioned. Serial sections were stained with hematoxylin and eosin and safra- nin-O to evaluate histomorphology and deposition of sulfated glycosaminoglycans, respectively.
Biochemical Analysis

Unimplanted samples and samples harvested after 7 and 12 weeks of in vivo implantation were analyzed biochemically to evaluate the variation in glycosaminoglycan, DNA, and hydroxyproline (collagen) content over time.

Total glycosaminoglycan content ofcell/polymer constructs was determined using papain digestion and the dimethylmethylene blue dye method.1” Samples were lyophilized for 24 hours and then digested under sterile conditions with papain type III (Sigma) at 125 mg/ml in a buffer of 0.1 M NaH,PO.â€ž 5 nuM ethylenediaminetetraacetic acid, and 5 mM cysteine hydrochloride at pH 7.0 overnight at 60Â°G before the dye was added. Dimethylmethylene blue stock solutionÂ was made using dimethylmethylene blue, sodium chloride, glycine, sodium azide in IN hydrochloride, and water. A spectrophotometer set at a wavelength of 520 nm was used to measure the optical density of the digested samples. A standard curve was generated using chondroitin 6-sulfate (Sigma). All samples and standards were tested in duplicate. Glycosaminoglycan was measured in micrograms per milliliter and reported as a percentage of wet tissue weight.

The total DNA content of samples (cell number) was determined using the Hoechst 33258 dye method.20 The dye was used at a concentration of 0.2 mg/ml in 0.01 M Tris, 1 mM EDTA, and 0.1 M sodium chloride. A spectrofluorometer (KO 100 Fluorometer; Hoefer Scientific Instruments, San Francisco, Calif.) was used to estimate the fluorescence of the papain-digested samples, and emission was measured at 400 to 550 nm or an excitation wavelength of 365 nm. Sterile DNA isolated from calf thymus (Sigma) was used to generate standardized curves. DNA content was reported as a percentage of dry tissue weight. The number of chondrocytes per sample can be calculated assuming an average of 7.7 pg of DNA per chondrocyte.20

The hydroxyproline content of the tissue digest was determined as described elsewhere.21 Briefly, the papain digests were hydrolyzed with equal volumes of 6N hydrochloride at 115Â°C for 16 to 24 hours. Chloramine T hydrate (Sigma) and /;-dimethylaminobenzaldehyde were added to hydrolyzed specimens and absorbancy was detected at 560 nm with a spectrophotometer immediately after the addition of the dye. The hydroxyproline content of the specimens was determined using shark cartilage as the standard (Sigma). All samples and standards were analyzed in duplicate. Hydroxyproline was measured in micrograms per milliliter and reported as a percentage of wet tissue weight.

Differences in mass and biochemical analysis in the tissue-engineered samples made with chondrocytes from both old and young donors at 0 weeks, 7 weeks, and 12 weeks and native cartilage were determined by two-way analysis of variance with Bonferroniâ€™s multiple comparison posttest using the statistical software GraphPacl Prism version 4.00 for Windows (GraphPad Software, San Diego, Calif.). Data are given as mean Â± SEM.

Hematoxylin and eosin staining of samples made with chondrocytes from old donors exhibited a histomorphology characteristic of cartilage (cells within basophilic ground substance) at 7 and 12 weeks after implantation (Fig. 3). Deposition of glycosaminoglycans was also evident with safraninO staining at both time points (Fig. 3). The extracellular matrix produced by chondrocytes from old donors was similar to that made by chondrocytes from young donors; however, no sample produced contiguous neocartilage across the entire specimen at the experimental time points studied. 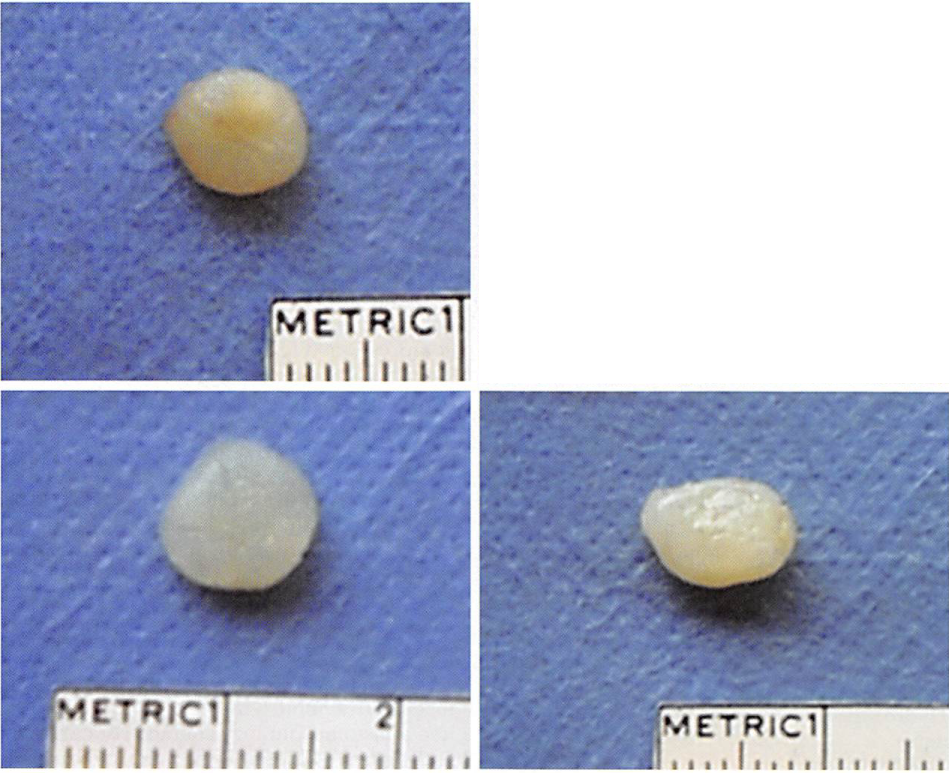 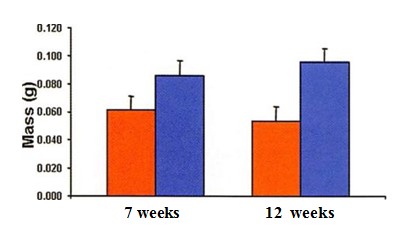 Fig. 2. Mean mass of neocartilage produced with chondrocytes from old (redbars) and young (blue bars) donors after 7 and 12 weeks of in vivo implantation. Data are presented as mean Â± SEM. 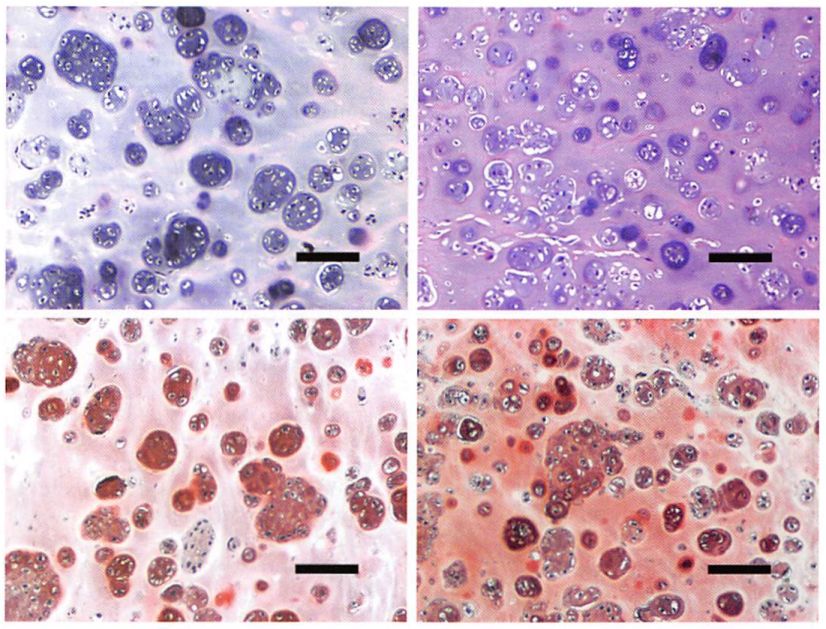 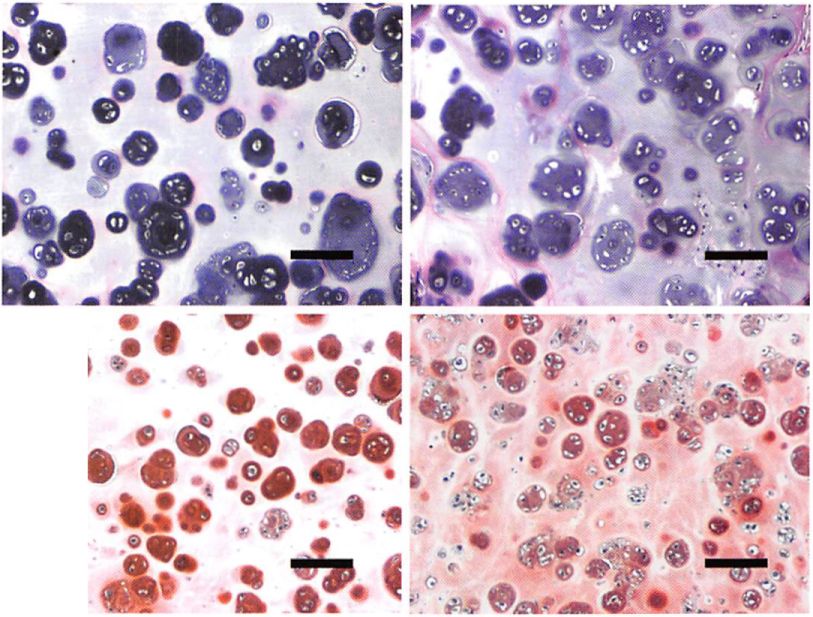 Fig. 3. Histological evaluation of tissue-engineered samples. Samples made with chondrocytes from old donors [above) and young donors (below) after 7 weeks (left column) and 12 weeks (right column) of in vivo implantation were stained with hematoxylin and eosin for evaluation of morphology and with safranin0 for evaluation of glycosaminoglycan deposition (bar = 100 /xm). 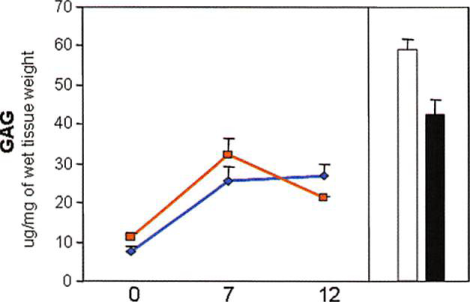 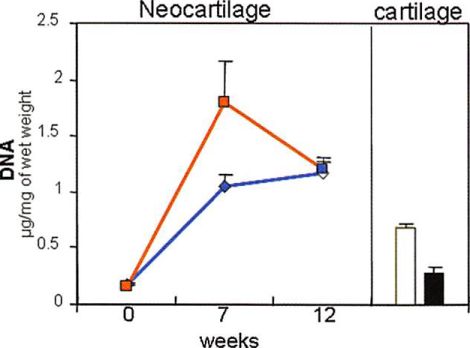 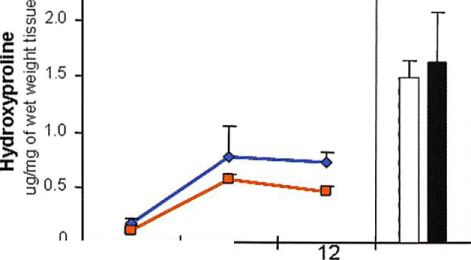 The hydroxyproline content (total collagen content) in native articular cartilage did not show a significant difference with donor age (/; > 0.05) (Fig. 4, below). The tissue-engineered samples made with chondrocytes from old donors showed a production of collagen by 7 weeks that was unchanged at 12 weeks. At 12 weeks, the total collagen content reached 32 percent of the amount found in native cartilage from old donors (/; < 0.05). Samples made with chondrocytes from young donors showed similar total collagen production at the specified time points (/; > 0.05).

Previously published studies suggested that articular chondrocytes isolated from â€œagedâ€ human and animal cartilage sources could have an impaired capacity to produce cartilage matrix in vivo.22″-â€™â€™ Kamada et al. showed that when bovine articular chondrocytes isolated from fetal, young, and old animals were cultured in alginate beads, proteoglycan production was inversely proportional to age.” Our results using fibrin gel scaffold in vivo contradict their in vitro findings. We foundÂ that the production of glycosaminoglycans in the in vivo tissue-engineered samples increased over time and did not show dependence based on donor age. In addition, Rotter et al. also found that human nasal chondrocytes from old donors seeded onto polylactic acid/polyglycolic acid scaffolds produced neocartilage in vivo similar to that generated by chondrocytes from young donors.21â€™ These results suggest that the type of cell scaffold could have a strong influence on the behavior of the chondrocytes, since chondrocytes from old and young donors produced similar quantities of glycosaminoglycan when encapsulated in either fibrin gel or PGA/PLA scaffolds in vivo. However, the intrinsic differences between the in vitro conditions used by Kamada et al. and others and the in vivo conditions used in our experiments also could have a strong influence on glycosaminogly can production, independent of the type of scaffold used. In addition, these data suggest that the â€œjuvenileâ€ regenerative capacity of chondrocytes from old donors is not limited to a single anatomical cell source.

Studies by Martin et al. and others have shown that chondrocytes from aged articular cartilage have a decreased mitotic index (cell multiplication) and increased expression of senescence-associated markers with age.ll,22,2:5-2′ Our study demonstrated that chondrocytes from old donors increased in cell number over time, as evidenced by the increase in DNA content of samples from preimplantation values to 12-week values. Interestingly, by 12 weeks, the DNA content of these samples was several times higher than the DNA content found in unimplanted samples (two times) and native cartilage from old donors (4.1 times). These results suggest that the release of chondrocytes from their aged native environment (matrix) and incorporation in fibrin gel scaffold may play an important role in restoring the replicative capacity of â€œsenescentâ€ chondrocytes from old donor sources. However, the significant decline in cell number in samples made with chondrocytes from old donors from 7 to 12 weeks, associated with a slight decline in mass, suggests that some cells could have undergone apoptosis, since histological analysis did not show evidence of inflammation or necrosis. Therefore, further studies with a longer time frame should be performed to evaluate this phenomenon and possible implications in the maintenance of neocartilage mass and volume over time. Collagen, especially type II collagen, is one component of the cartilage extracellular matrix that defines the type of cartilage (hyaline versusÂ fibrocartilage) and is an important constituent contributing to the biomechanical properties of native and engineered cartilage. Our study shows that although the total collagen content (hydroxyproline content) found in samples made with chondrocytes from old donors was similar to that found in samples made from young cells, it was very low compared with the values found in native cartilage (<50 percent). These results were in accordance with most of the published data obtained regarding tissue engineering cartilage with chondrocytes from young donors and different anatomical sources.28’2’1 Therefore, it seems that the low production of collagen by chondrocytes is a fundamental problem of tissue engineering cartilage and not specifically dependent on donor age.

The current study showed that only tissue-engineered samples made with chondrocytes from old donors slightly decreased in mass from 7 to 12 weeks. This finding was not associated with a decrease in glycosaminoglycan or total collagen content (hydroxyproline), both of which increased over time (Fig. 4, above and below). This change in mass could have been associated with a change in the structure of the glycosaminoglycan produced. Several published studies have shown that the length and number of chondroitin sulfate and keratan sulfate chains attached to hyaluronic acid (structures that retain water in the glycosaminoglycan) decrease with increasing age.1014 Therefore, the type and characteristics of glycosaminoglycan produced by chondrocytes from old donors when tissue engineering cartilage in vivo should be studied to determine their implications in the retention of mass over time and the biomechanical properties of the neocartilage produced with these cells.

Articular chondrocytes from old sheep donors produce tissue-engineered cartilage in vivo. Chondrocytes from old donors encapsulated in fibrin gel polymer can be rejuvenated and produce neocartilage in vivo with characteristics similar to those of the neocartilage made with young donors, as evidenced by gross appearance and histological and biochemical analysis. This study suggests that middle-aged and elderly patients could benefit from cartilage tissue-engineering approaches using their own â€œagedâ€ autologous articular cartilage as a source of reparative chondrocytes.