It’s not just hipsters in Brooklyn wearing beards these days. The trend has gone mainstream and the bigger the better seems to be many men’s moto. Why? It’s found such broad traction because beards creates the illusion of a larger, more prominent jaw – a trait traditionally perceived as masculine.

Men’s faces and particularly lower jaws are typically larger than women’s. Hence, small jaws are interpreted as feminine and large jaws as masculine. 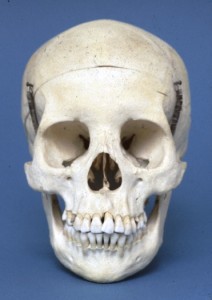 These are female (left) and male (right) skull images obtained through the generosity of the Atkinson Skull Collection at the University of the Pacific School of Dentistry in San Francisco. The male skull and particularly the lower jaw is visibly larger than that of the female.

The current beard fashion trend is a convenient one for  men with jaws of small dimensions. When the fashion trend dies as most do, what is the man with a small jaw to do? A permanent, long lasting solution is outpatient surgery with an implant that builds up the posterior mandible to create a broader jaw with more depth. Adding a chin implant will also add to the size and definition of the jaw.

Many men benefit from both.

Rather than sport a beard indefinitely, the patient below sought a more defined jawline and stronger chin through custom implants. Adding to his posterior mandible and chin filled out his face and achieved a more pleasing balance to his facial features.