Dr. Yaremchuk lectures at premier medical conferences and elite medical schools around the world, sharing his techniques and innovations with fellow surgeons and training the next generation of doctors. 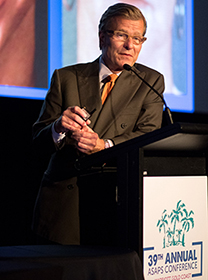 Other lectures and teaching courses include:

Dr. Yaremchuk also served on a facial rejuvenation panel on the subject: "You need a jaw to have a jawline."

May 2012
Guest Lecturer at Advanced Orbital Symposium: A Tribute to the Orbital Surgery of Paul Tessier in Baltimore, Maryland

May 2012
Guest Lecturer at ASMS Symposium ‘Advances in Facial Restoration and Rejuvenation’ in New Orleans, Louisiana

May 2012
Guest lecturer at Russian national research medical university in Moscow.
Aesthetic Surgery of the face and neck

May 2012
Visiting professor at the University of Pittsburgh

April 2012
Visiting professor at the University of Louisville

January 2012
Guest speaker at the Houston Society of Plastic Surgeons

December 2011
Visiting professor at the University of Illinois

December 2011
Visiting professor at the University of Michigan

August 2011
Visiting professor at the University of Wisconsin

February 4-5, 2011
Lecturing for Russian Ministry of Health and the Chair of plastic, reconstructive surgery, cosmetology and cell technologies in Moscow, Russia
Topic: Contemporary Approaches to Rejuvenation of Face and Body

November 21-24, 2010
Lecturing at the Chilean Society of Plastic Surgery in Pucon, Chile

January 2010
Lectured at the Atlanta Oculoplastic Symposium in Atlanta, Georgia
Topic: Improving periorbital aesthetics in patients with midface deficiency and soft tissue and skeletal manipulations to rejuvenate the aging face

June 2009
Lectured at the 29th Annual Meeting of the Brazilian Society of Plastic Surgeons in Sao Paulo, Brazil
Topics included:

April 1, 2008
Keynote lecturer at the German Society of Aesthetic Plastic Surgery
Topics include:

November 2007
The invited speaker at the Korean Society of Plastic and Reconstructive Surgeons annual meeting which was held in Seoul, Korea
Topics included: