Aging of the Facial Skeleton: Aesthetic Implications and Rejuvenation Strategies

Background: Facial aging is a dynamic process involving the aging of soft-tissue and bony structures. In this study, the authors demonstrate how the facial skeleton changes with age in both male and female subjects and what impact these structural changes may have on overall facial aesthetics.

To effectively rejuvenate the aging face, it is necessary to understand the dynamic aging process. Epidermal thinning and the decrease in collagen cause skin to lose its elasticity. Loss of fat, coupled with gravity and muscle pull, leads to wrinkling and the formation of dynamic lines. These factors contribute to the formation of nasolabial folds, jowls, crowâ€™s feet, and the sagging appearance of aged facial skin.

The aging process has also been shown to affect the facial bones. Multiple studies suggest that the bony aging of the orbit and midface is a process primarily of contraction and morphologic change.

1-7 Past studies by our group analyzing the midface and orbit in smaller sample sizes found that the facial bones experience volume loss with increasing age. In this study, we incorporate and expand on all our previous work and present the aging of the face in its entirety and in a substantially larger subject size. We also explore the aesthetic implications of these structural changes and provide possible rejuvenation strategies for each area of the face.

Computed tomographic scans of the facial bones, at a slice width of 1.0 mm, were obtained from 120 Caucasian subjects (60 women and 60 men). There were 20 male and 20 female subjects in each of three age categories: young (20 to 40 years), middle (41 to 64 years), and old (65 years or older). Subjects underwent computed tomographic scanning for the following medical reasons: to rule out facial bone fracture (n = 75), to assess severe sinusitis (n = 28), and for a soft-tissue diagnosis (cellulitis, soft-tissue mass, or to rule out abscess) ( n =17). Only scans negative for fracture and without signs of past fracture or bony involvement, in cases of soft-tissue disease, were included in this study. Edentulous patients were excluded from this study. 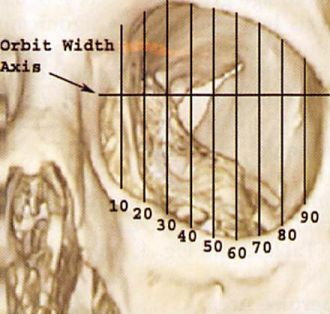 Fig.1. The distance from the orbital width axis to the superior and inferior orbital rims was obtained at nine equal increments. 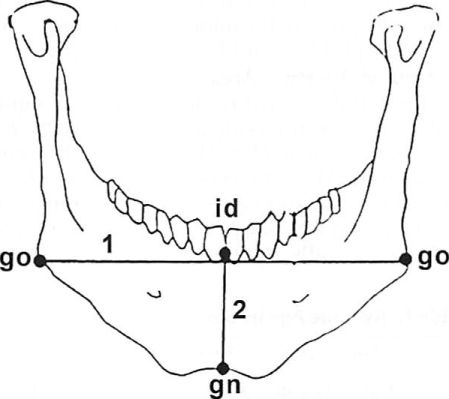 All measurements were made on a General Electric Advantage Windows workstation (General Electric Co., Waukesha, Wis.), running version 4.2 software on HP xw8000s (Hewlett-Packard Company, Palo Alto, Calif.). One-way analysis of variance was used to analyze results within each sex across age groups. Results were considered significant at a value of p < 0.05. 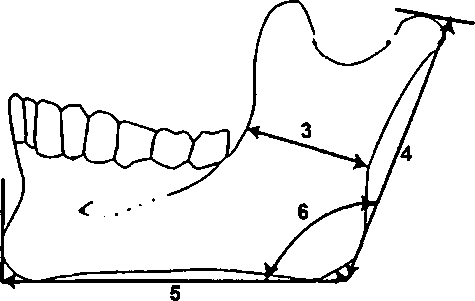 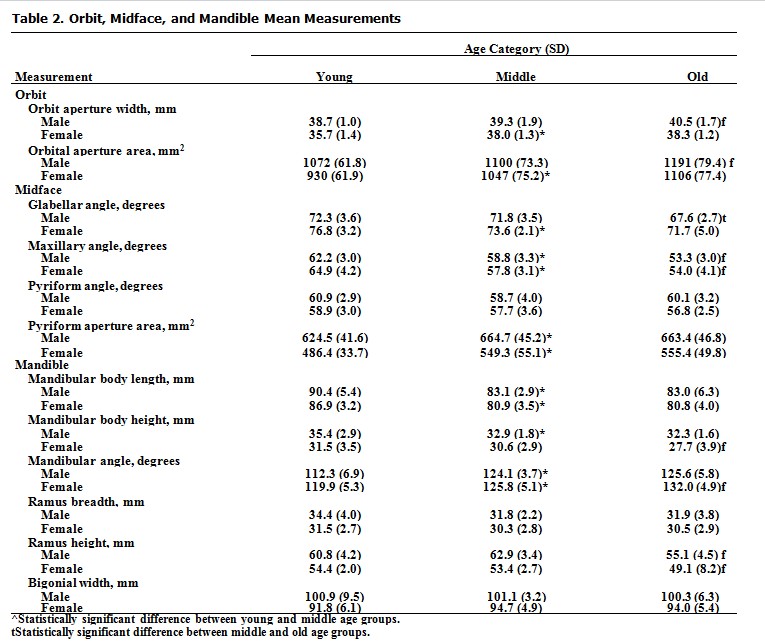 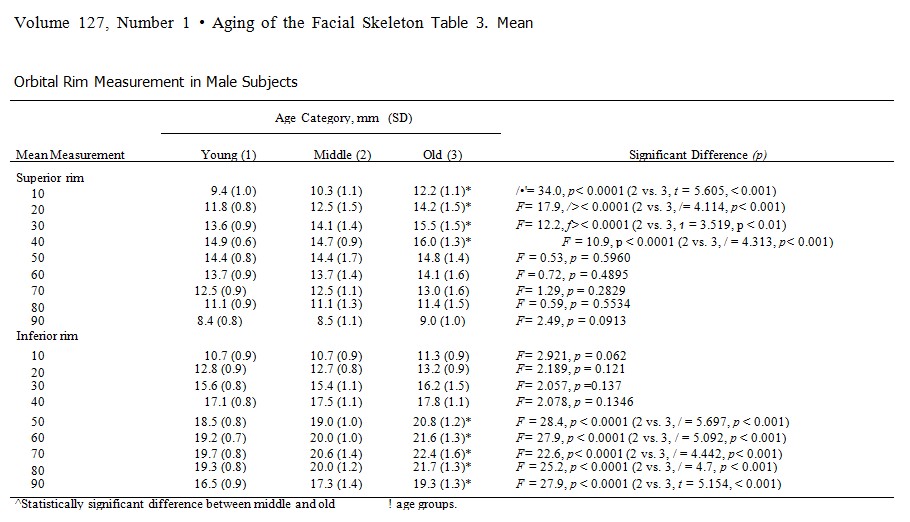 The mandibular body height decreased significantly with age for both male (F = 9.8, p = 0.0002) and female (F = 6.03, p = 0.0043) study populations. Male subjects had a statistically significant from the young age group to the middle age group (/ = 6.404, p < 0.001). Female subjects had a statistically significant increase from the young age group to the middle age group (1 = 3.38, p < 0.01) and between the middle age group and the old age group (/ = 3.87, p < 0.001) (Table 2 and Fig. 5).
Much is known with regard to the aging of the facial skin and subcutaneous tissues.8-10 This knowledge has made soft-tissue redraping and skin reduction the predominant approach for rejuvenating the aging face. Soft-tissue augmentation to replace volume loss has become more accepted recently by many to enhance the treatment plan for those seeking facial rejuvenation.11-13 This volume loss is likely caused by soft-tissue atrophy in addition to a loss of bony support and projection. The bony components of the face are important for overall facial three- dimensional contour, as they provide the framework on which the soft-tissue envelope drapes. If this framework experiences a morphologic change with age, the overlying soft tissues will subsequently project differently.

Improvements in technique have enhanced the predictability of facial fat grafting. When autologous fat is not an option, alternative facial fillers including calcium hydroxylapatite and hyaluronic acid may provide excellent results.15

Skeletal augmentation, using implants made of silicone or porous polyethylene, is a simple and effective method of reversing age-related changes of the facial skeleton in patients with intact occlusion. Skeletal implants correct concave morphology. by increasing projection and provide a means of resuspending soft tissues that have descended off a deficient bony platform.1617 Silicone implants are a popular choice for skeletal reconstruction and augmentation and provide efficient and effective rejuvenation, especially with the use of the textured Silastic implant.18 The rates of extrusion and malposition of the silicone implants over time, however, have led some to use more porous textured implants. The clinical utility and morbidity associated with the use of porous polyethylene facial implants has been described well. Yaremchuk reported in 2003 on 370 consecutive implants with an average follow-up of 27 months. The overall reoperation rate was 10 percent (n = 16), which included operations to remove implants because of infections (n = 4) or to improve displeasing contours (n = 12).19 Skeletal augmentation offers a permanent rejuvenation of the facial skeleton and may be performed in conjunction with soft-tissue redraping. A discussion of our findings for each part of the face and possible aesthetic effects follows. 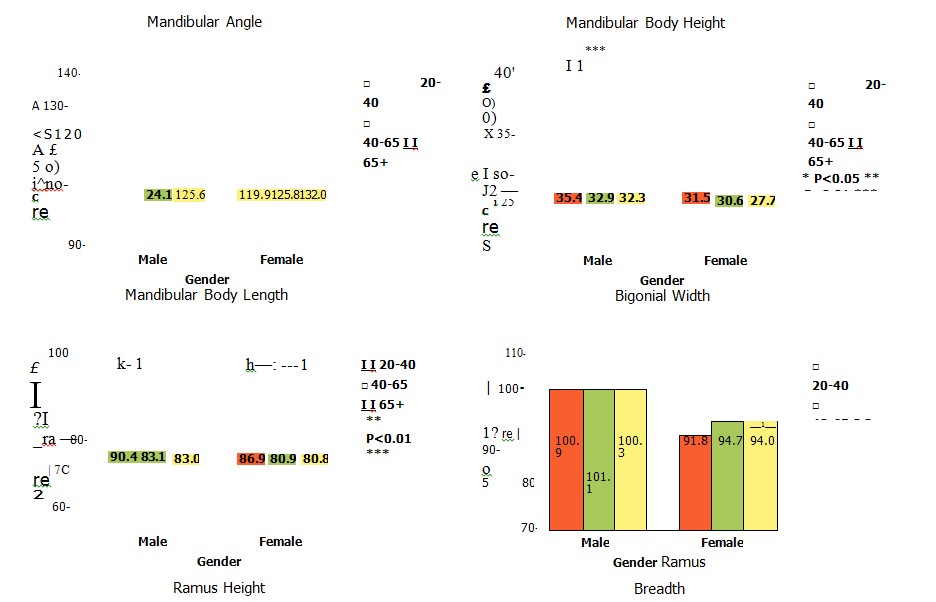 Superomedial rim remodeling may contribute to the unmasking of the medial upper lid fat, a change currently attributed to weakening of the orbital septum. This in combination with the glabellar angle becoming more acute with age may also lead to the perceived descent of the medial brow and the formation of glabella skin creases. The inferolateral rim remodeling and increase in orbital aperture width may contribute to the formation of crowâ€™s feet and lower lid lag (Fig. 6).

As we try to further develop a concept of how the periorbital area changes with age, a possible working hypothesis is that the bony structures undergo morphologic change and also result in a widening of the orbital aperture that results in a change in the appearance of the overlying soft-tissue envelope. The overall widening of the orbital aperture results in a change in the relationship between the orbital contents and the surrounding bony framework. This may result in changes such as prominence of fat pads, deepening of sulci, or the enophthalmos and ptosis that may be seen with aging.

The changes seen in the upper half of the orbit may result in the soft tissues rolling into the orbital aperture and thus the appearance of brow descent and lateral orbital hooding. In the lower half of the orbit, the tissues may roll over the recessed bony ledge, leading to lag of the lower lid, prominence of lower lid fat pockets, and deepening of the nasojugal groove as disproportionate tissue piles up against the orbicularis origin along the medial rim and the origin of the orbicularis is reshaped with its underlying bony attachment. The decrease in maxillary angle may lead to decreased skeletal support for the malar fat pad, which may allow die nasolabial crease to become more prominent. The increase in pyriform aperture with increased age may contribute to decreased nasal support and projection.

The length and height of the mandible both decreased significantly for each sex. These bony changes may result in the appearance of decreased chin projection that is found with increased age. The mandible is the foundation of the lower face, and any change in mandibular projection, width, or height can affect overall aesthetics. Patients with a normal mandibular ramus height and length of the mandibular body have an excellent support for soft-tissue repositioning. In contrast, those with a short ramus, open mandibular angle, and short mandibular body have poor skeletal support for midface and perioral soft-tissue repositioning and often benefit from volumetric augmentation to enhance their skeletal support.20 Patients with decreased chin projection and a prejowl sulcus often benefit from alloplastic augmentation.21 Mandibular volume loss also affects the aging of the neck, as it may contribute to the increased laxity of the platysma and soft tissues of the neck. The mandibular angle increased with age for both sexes in our study population. The increase in mandibular angle may result in blunting or the loss of definition of the lower border of the face. A blunted mandibular angle creates a loss of jawline definition (Fig. 7).

The facial skeleton experiences morphologic change and an overall decrease in volume with increasing age. This results in decreased support and projection of the soft-tissue envelope. This in addition to the decrease in facial fat leads to the appearance of the aged face. Howard N. Langstein, M.D. Division of Plastic Surgery University of Rochester Medical Center 601 Elmwood Avenue, Box 661 Rochester, N.Y. 14642 Howard_Langstein@urmc.rochester.edu

5. Pessa JE. An algorithm of facial aging: Verification of Lam- brosâ€™s theory by three-dimensional stereolithography, with reference to the pathogenesis of midfacial aging, scleral show, and the lateral suborbital trough deformity. Plast Re- const r Surg. 2000;106:479-487.