A retrospective review of clinical outcomes was performed to determine the clinical utility and morbidity associated with the use of porous polyethylene facial implants. Three hundred seventy implants were placed in 162 consecutive patients, in 178 operations performed in 11 years. The number of patients, the number of implants used, and the average follow-up period were categorized according to the cause of the deformity. The resultant distribution was as follows: acquired (tumor-related), 17 patients, 39 implants, and 30 months; congenital, eight patients, 31 implants, and 92 months; aesthetic, 39 patients, 97 implants, and 24 months; secondary posttraumatic, 48 patients, 139 implants, and 37 months; and acute trauma (internal orbit reconstruction), 50 patients, 64 implants, and 9 months. The distribution of implants according to location was as follows: frontal, 21; temporal, 30; internal orbit, 145; infraorbital rim, 28; malar, 58; paranasal, 29; nasal, 13; mandible, 24; and chin, 22. The combined average follow-up period per patient was 27 months (range, immediate postoperative period to 11 years). All implants were placed in the subperiosteal plane, and the majority were fixed with titanium screws. Antibiotics were administered perioperatively. No implants were extruded or migrated, formed clinically ap-parent capsules, or caused symptoms attributable to bioincompatibility. The overall reoperation rate was 10 percent (n = 16), which included operations to remove implants because of acute infections (2 percent, n = 3) or a late infection (1 percent, n = 1), to remove implants causing displeasing contours (2 percent, n = 3), and to improve contours (6 percent, n = 9). Porous polyethylene implants have biomaterial properties favorable for facial skeletal augmentation. Screw application of the implants to the skeleton allows precise predictable contouring, thus limiting the need for revisional surgical procedures. (Plast. Reconstr. Surg. Ill: 1818, 2003.)

The peer-reviewed literature reports the successful use of various polymers and ceramics to augment the contours of the facial skeleton. In 1997, a comprehensive review of all English- language publications revealed that the use ofÂ facial implants was associated with low morbidity rates, although rates were material and site dependent.1 The literature published after 1997 similarly reports clinical efficacy with low morbidity rates. However, the many case reports of late, implant-related complications 2-21 suggest that the reported, highly favorable experience with facial implants might not adequately represent the actual experience. This lack of correlation has two possible explanations. One is that the majority of clinical studies involve limited follow-up times. Patients with implant complications may be treated by other physicians while being lost to follow-up monitoring by the primary surgeon. Many articles were not included in the 1997 review because they made no mention of follow-up time. The other major reason that the published complication rates do not reflect the actual experience is that clinicians rarely publish a series with poor results.

This article reviews one surgeonâ€™s experience with the use of porous polyethylene (marketed as Medpor Biomaterial; Porex Surgical, Newman, Ga.) to augment the craniofacial skeleton. The pore size of this biomaterial allows fibrous tissue in growth and thus relative implant incorporation. This is in contrast to smooth-surface implants (such as silicone rubber), which inevitably become encased in a fibrous tissue capsule through the host foreign body response. Encapsulation and predisposition to movement are responsible for the majority of late complications reported for smooth-surface implants.2-11,13â€™14,16-20â€™22-27 As noted in the available literature,28-39 I have not observed capsule-related complications withÂ the use of porous polyethylene.

Unlike the majority of clinical reports describing the use of facial implants, however, this study presents a large number of consecutive patients, with longer follow-up periods. During an 11-year period, 370 porous polyethylene implants were placed in 162 patients. All implants were placed in the subperiosteal plane, and the majority were fixed with titanium screws. The distribution of implants according to the location and cause of the deformity, the associated morbidity rates, and the follow-up periods are documented. General principles and techniques and clinical examples are presented.

Three maneuvers are key for accurate skeletal augmentation with porous polyethylene: (1) wide subperiosteal exposure of the area to be augmented, (2) screw fixation of the implant to the facial skeleton, and (3) â€œin-placeâ€ implant contouring. Wide subperiosteal exposure is necessary for accurate identification of the area to be augmented, correct positioning of the implant (to whose porous surface soft tissues tend to adhere), and establishment of access for definitive contouring.

Implants are fixed to the facial skeleton with titanium screws (Synthes Corp., Paoli, Pa.). Screw fixation prevents intraoperative or post operative movement of the implants, applies the implant to the skeleton, with elimination of any gaps between the skeleton and the implant, and allows in-place contouring of the implant. In-place contouring allows final adjustment of the implant shape and establishment of a smooth transition between the implant edge and the facial skeleton. DependingÂ on the exposure and requirements, this contouring can be performed with a scalpel, rotating burr, or rasp (Fig. 1). It is important to note that the manufacturer provides multiple implant shapes and sizes intended for specific anatomical areas. It is unusual for me to use an implant without changing its contour (reducing it) to meet the needs of the specific situation.

Cephalosporins were administered perioperatively. The operative sites were not irrigated, and the implants were not impregnated with antibiotic solution. 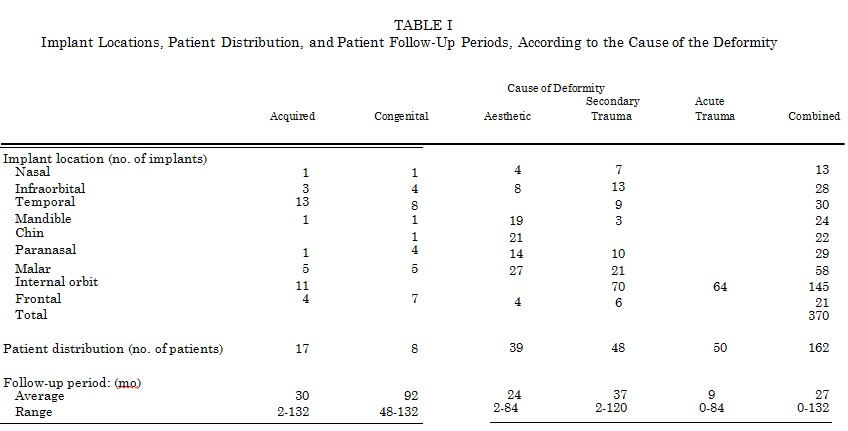 In 11 years, I placed 370 implants in 162 consecutive patients, in 178 operations. There were 97 male patients and 65 female patients, with an average age of 31 years (range, 12 to 72 years). The average follow-up period per patient was 27 months (range, immediate postoperative period to 132 months).

When the 162 patients and 370 implants were categorized according to the cause of the deformity, the distribution was as follows: acute posttraumatic (internal orbit), 50 patients and 64 implants; secondary posttraumatic, 48 patients and 139 implants; aesthetic, 39 patients and 97 implants; congenital, eight patients and 31 implants; and acquired (usually tumor- related deformities), 17 patients and 39 implants. When categorized according to location, the implant distribution was as follows: nasal, 13; infraorbital rim, 28; temporal, 30; mandibular body and ramus, 24; chin, 22; paraÂ¬nasal, 29; malar, 58; internal orbit, 145; and frontal, 21. These data and the mean follow-up periods for each treatment category are summarized in Figure 2 and Table I.Â Four patients (3 percent) in this series experienced implant-related infections. All had undergone implant placement through intraoral approaches, and all were treated with implant removal. Three patients (2 percent) presented in the early postoperative period and one patient (1 percent) presented late. Among the three patients who presented in the early period, the operative site cultures for two patients yielded alpha streptococcal species (mouth organisms). One of those patients had experienced an infection in the operative area 4 years earlier, after placement of a bone graft. The third patient who presented with an acute infection was treated by her internist with intravenously administered antibiotics for 7 days, because of oropharyngeal cellulitis (beginning 2 days after the operation), before her implantsÂ moved. Her operative site culture revealed no growth. One patient presented with an intraorally exposed implant 4 years after malar augmentation. 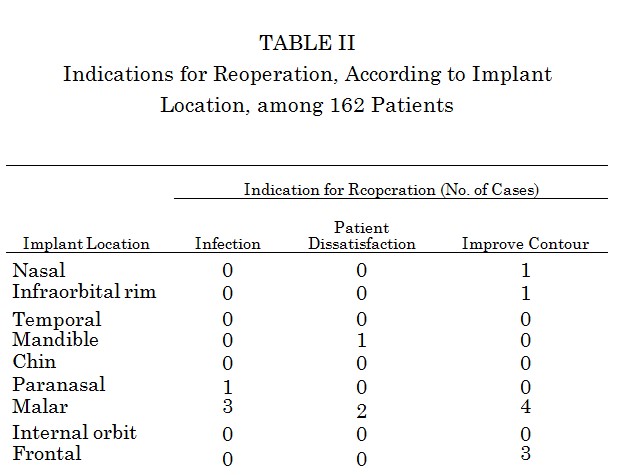 The success and Stability of the reconstructions reported in this series reflect the biocompatibility and material properties of the implant material, as well as adherence to sound surgical principles. Both experimental laboratory data and the clinical experience of others help to explain and support the clinical experience presented here.
The biocompatibility of an implant is determined by its chemical composition, its biostability, and its surface characteristics. In general, the least-reactive biomaterials are those composed of elements nearest to carbon and calcium on the periodic table, because these elements constitute the greatest (nonwater) part of the human body.10 ’11 Polyethylene resins areÂ composed of straight-chain aliphatic hydrocarbons. Because polyethylene is inert, with low tissue reactivity, it is used as a standard reference material for biocompatibility testing.12

Porous polyethylene is insoluble in tissue fluid, is not resorbed, and has demonstrated long-term structural stability when used as a facial skeletal onlay.42-16 Animal and clinical histological studies have not demonstrated evidence of implant degradation. The foreign body response has been minimal.47-49 The chemical composition and stability of this material explain the absence of type IV hypersensitivity (cell-mediated) reactions, local or systemic malignancy, and systemic disease associated with its use as an augmentation material, in this study and in the available literature

The favorable biocompatibility of this implant material can also be attributed to its porous surface. Porous polyethylene has pore sizes that allow fibrous tissue ingrowth and relativeÂ host incorporation, as opposed to the host encapsulation observed with smooth- surface implants. Porous polyethylene has a continuous system of inner connecting pores approximately 100 to 250 /xm in diameter. Animal studies have demonstrated that pore sizes of more than 100 /xm encourage tissue ingrowth.1718 Pore sizes of less than 100 /xm limit the extent of tissue ingrowth, whereas materials with large pore sizes have drawbacks associated with material breakdown.50-52 Clinical specimens demonstrated rapid ingrowth of fibrous tissue after human implantation. Rather than the dense connective tissue capsules observed with smooth-surface implants, porous polyethylene implants exhibited a thin connective tissue membrane that was contiguous with the ingrown tissue.19 It was noted during revisional operations that fibrous tissue in growth was sufficient to result in bleeding when the implants were modified in situ with a scalpel, and in certain circumstances, in growth exhibited sufficient vascularity to allow skin grafts to be placed directly over the implant.19

Fibrous tissue ingrowth improves the bio-compatibility of porous implants because it limits their movement. Movement is an essential factor in determining the host response to an implant/â€™2 Because the host foreign body reaction encapsulates smooth-surface implants, a smooth implant never bonds to the host bed and therefore is predisposed to move. Encapsulation of smooth implants and their subsequent predisposition to movement are directly or indirectly responsible for the majority of the late complications observed with smooth implants. These complications include the tendency of smooth implants placed in the orbital floor to migrate and distort the eyelid,6-8,18 cause hemorrhage,9,10,12,14,20 obstruct the lacrimal system,811 or erode into the maxillary sinus, acting as a nidus for infection.217 The rapid tissue ingrowth and mucosalization of porous polyethylene implants, as observed in animal studies designed to simulate orbitalÂ floor reconstruction,03 immobilize these implants, which explains why these complications have not been reported with the use of porous polyethylene. When used to augment the chin, smooth silicone implants are known to cause significant bone resorption, which is attributed to implant motion caused by the overlying mentalis muscle.54,55 Although it is usually not clinically apparent, bone resorption after silastic chin implantation may be severe enough to result in tooth root erosion among patients with excessive mentalis muscle contraction.2′ I think that smooth implant migration is the reason for implant malpositioning in certain clinical instances. Animal studies have demonstrated that porous implants result in less bone resorption than do smooth implants.56 Bikhazi and Van Antwerp/” in a prospective cephalo metric study of five patients undergoing chin augmentation with porous polyethylene implants, did not observe bone resorption beÂ¬neath the implants.

When I removed cheek implants at 6 months and chin and mandibularÂ implants at 8 months from two patients who were referred for implant removal, there was no visible bone depression beneath the implants. 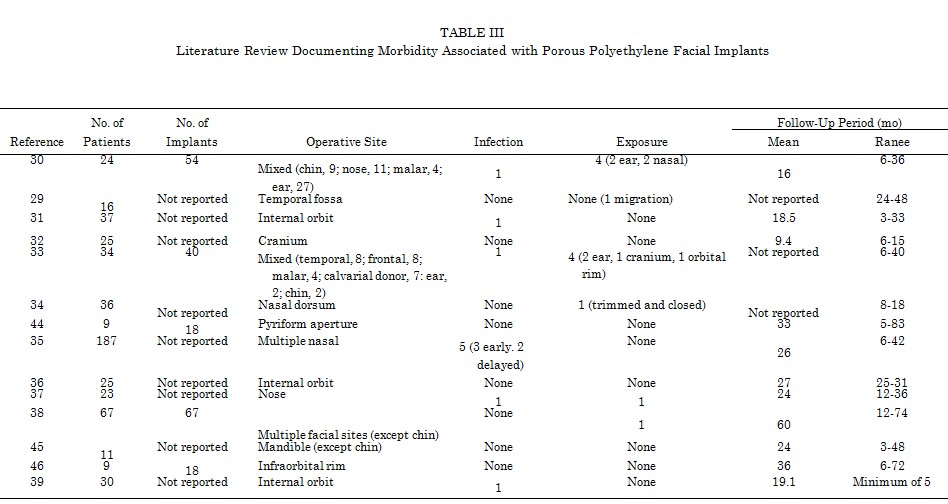 Wider exposure has been demonstrated to result in more accurate implant positioning. Because the initial augmentation has been considered accurate for the majority of patients, revisional surgical procedures have been infrequent. When porous polyethylene implants require removal, dissection directly on the implant minimizes adjacent soft-tissue trauma. The absence of a thick fibrous capsule allows the soft tissues to colÂ¬lapse, permitting restoration of the preimplantation contour. This is not always the case after silicone implant removal.26