Central midface concavity was corrected with the placement of porous polyethylene implants in the paranasal area. This simulated the effect of skeletal osteotomies and advancement without altering dental occlusion. Implants were placed to correct congenital, posttraumatic, and cleft related skeletal midface retrusion in nine patients. In seven of the patients, paranasal augmentation was performed in conjunction with rhinoplasty. There have been no implant related complications during a mean 33- month follow-up (range 5 to 83 months). Screw fixation of these implants ensures stable positioning and allows precise final contouring during surgery. (Plast. Reconstr. Surg. 102: 1676, 1998.)

Concavity of the midface may be aesthetically displeasing. A relative deficiency in lower midface projection may be congenital or may be acquired, particularly after cleft surgery and trauma. It is often associated with occlusal disharmonies. Malocclusions associated with facial concavity are usually best treated with skeletal surgery. An osteotomy of the lower maxilla allows the maxilla to be advanced, thereby permitting establishment of proper dental relationships and enhancement of midface contour. The improvement in function and appearance justifies, in these patients, perioperative orthodontic treatment, the morbidity associated with skeletal surgery, and the hospital expense.

Our clinical experience shows that patients with satisfactory occlusion and midface concavity can have their aesthetic desires satisfied with skeletal augmentation. Implantation of alloplastic material in the paranasal area can simulate the visual effect of Le Fort I advancement and other skeletal manipulations. Paranasal augmentation does not alter occlusal relationships and, therefore, avoids perioperative orthodontic treatment and limits surgical morbidity and hospital expense.

Severe cases of nasomaxillary deficiency, seen with Binderâ€™s syndrome, have been treated with bone and cartilage grafts alone or together with osteotomies.1-7 Lesser degrees of midface deficiency are usually treated with cartilage grafts or silicone implants as adjuncts to aesthetic rhinoplasty.8-10 Caronni8 proposed the placement of customcarved silicone implants in a subperiosteal pocket along the nasal base at the time of rhinoplasty for patients with an acute nasolabial angle.

Guerrerosantos9 described the use of Proplast to alter the projection of the nasal base, nasolabial angle, and vertical plane of the lip. Hinderer10 similarly reported the use of lower nasal base silicone implants in patients with retrusion of the upper portion of the alveolar process. He also described the use of customshaped lateral premaxillaiy silicone implants in patients with inadequate projection of the maxillary body.10 These reports describe the lower portion of the transfixion incision as the preferred approach for nasal base implants, and the lateral osteotomy approach for lateral premaxillary implants.

This report describes the use of porous polyethylene implants used to selectively augment the paranasal skeleton, often in conjunction with rhinoplasty. These implants were placed through upper gingivobuccal sulcus incisions. Fixation of the implant to the skeleton with screws ensured precise placement and allowed inplace contouring at the time of surgery.11 This paranasal augmentation has camouflaged relative midface hypoplasia in a series of nineÂ patients who were operated on over a period of 6 years. No early or late complications have been associated with this surgery.

Ail implants in this series were porous polyethylene. In the first four procedures, paranasal implants were carved from 6-mm thick porous polyethylene blocks. Now, preshaped paranasal implants are available from Porex Surgical, Inc. (College Park, Ga.). They are designed as right and left crescents and come in two sizes. The smaller implant is 27 mm long by 25 mm high and provides 4.5 mm of projection. The larger implant, which is 30 mm long by 28 mm high, provides 7 mm of projection. These implants are designed to be tailored to the patientâ€™s particular aesthetic needs. Porous polyethylene is easily carved with a scalpel, and is conformable and contourable with a high-speed burr (Fig. 1).

Paranasal augmentation can be done under local or general anesthesia. After sterile preoperative preparation and draping, a local anesthetic with 1:100,000 epinephrine is infiltrated at the surgical site. An upper gingivobuccal sulcus incision is made just lateral to the piriform aperture to avoid placing incisions directly over the implant. An adequate cuff of mucosa is left to allow layered closure.

Subperiosteal dissection exposes the area to be augmented. The implant is positioned to sit flush on the bone. The patientâ€™s anatomy will determine whether the entire crescent or just the horizontal or vertical limb of the crescent will be used (Fig. 1).

The wound is closed in two layers. Perioperative antibiotics are used. The implant is notÂ impregnated with any antibiotics at the time of surgery.

Fig. 1. Porous polyethylene paranasal implants are designed to augment both the lateral and inferior aspects of the pyriform aperture. Implants can be carved to allow selective augmentation. Screw fixation prevents movement of the implant and allows in-place contouring. {Above) Intact screw- fixated implant about to be contoured with power equipment. (Center) Implant contoured and positioned to selectively augment alveolus. {Below) Implant contoured and positioned to selectively augment maxilla lateral to pyriform aperture.

Nine patients underwent placement of paranasal implants from June of 1990 to June of 1997. All patients were women, and all procedures completed were bilateral. Age at the time of surgery ranged from 23 to 48 years, with a mean of 35 years. Patient follow-up has ranged from 5 to 83 months, with a mean of 33 months.
All patients had satisfactory occlusion. In all patients, the indication for placement of paranasal implants was a desire to improve their relative maxillary retrusion and, thereby, improve their overall facial appearance. Paranasal augmentation was performed in conjunction with rhinoplasty in five of the nine patients.

The relative maxillary deficiency in this patient population was both acquired and congenital. The clinical presentations of these patients with maxillary retrusion are listed in Table I. Three patients presented after surgical intervention for facial fracture, and one after cleft lip repair. Two patients had flaring maxillary dentition, and one of these had orthodontic treatment and correction of class III inclusion. Of the three patients with congenital aesthetic nasal deformities, one was black, one was Asian, and one was Caucasian with a large nose. Additional procedures performed at the time of placement of paranasal implants are also listed in Table I.

Satisfactory aesthetic results were achieved in this group of patients. There were no infections or extrusion of implants. The following patients are reprfesentative examples.

Case 1
A 31-year-old woman, after remote cleft lip and cleft palate repair and two rhinoplasties, underwent rhinoplasty with tip graft, alar base repositioning, and paranasal augmentation. A larger implant was placed on the cleft side. Implants were contoured and positioned in the same manner as those shown in Figure 1, center (Fig. 2).

Case 4
A 44-year-old black woman presented for rhinoplasty. An open rhinoplasty with tip graft, submucous resection, and paranasal augmentation was performed. Implants were positioned and contoured in the same manner as those in Figure 1, above (Fig. 5).

Augmentation of the lower maxilla with alloplastic implants provides the same visual effect as that obtained with skeletal rearrangements or augmentation with autogenous materials. Paranasal augmentation can improve facial balance in patients who have relative midface deficiency and acceptable dental occlusion. This relative midfacial concavity may be congenital or acquired.
A deficiency in lower midface projection is common in patients with surgically corrected clefts. Both the alteration of soft tissue skeletal relationships during surgical repair and the growth retarding forces of scarring are believed to restrict palatal and maxillary growth after cleft repair. As shown in case 1, augmentation of the alveolus and lower lateral paranasal area will improve lip and nasal relationships and overall facial balance. 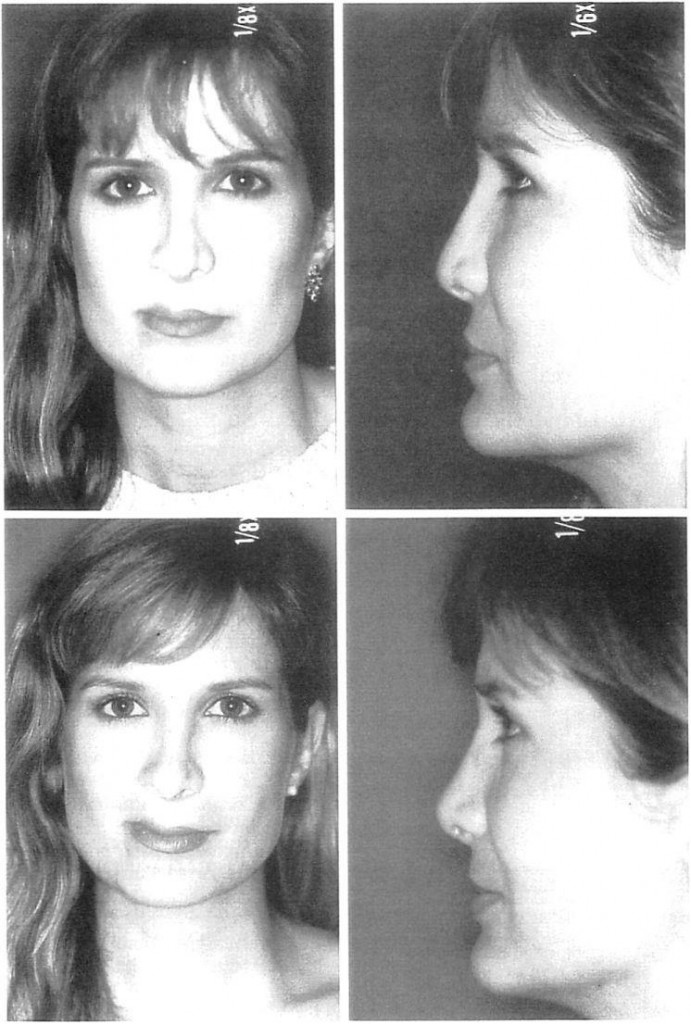 Patients who have been treated for extensive midface or panfacial fractures may present with relative midface deficiency but normal occlusion. This â€œdish faceâ€ deformity occurs when preinjury maxillary anatomy is not restored or not maintained. Retrusion of the central midface may occur when upper and lower jaw fractures are reduced with respect to occlusion only and not to preinjury three-dimensional skeletal anatomy above the occlusal