Numerous techniques have been described to augment the temporal area, including the placement of various allo- plastic implants,3’5 free fat grafting,6 the injection and onlay of various absorbable and permanent materials,7 9 locoregional flaps,10’12 and, in some instances, free tissueÂ transfer.13,14 Here, we describe the application of methyl methacrylate (MMA) to fill depressions in the temporal area.15 In instances in which no previous surgery has been performed or when the temporal area hasÂ served as a dissection plane for surgery in adjacent areas (eg, with a subperiosteal facelift), the implant material is placedÂ beneath the temporal muscle through a limited incision in the hair-bearing scalp. When previous reconstructive surgery has been performed in the temporal area and the temporalis anatomy has been distorted, the areas of depression are accessed through existing surgical incision scars. MMA is placed over the temporal and adjacent skeleton, as necessary. These methods of placing MMA to reconstruct temporal contour depressions have been reliable, durable, and relatively free of complications

Aesthetic Indications
A vertical, 4- to 5-cm incision is made in the temporal scalp (Figures 1 and 2). This incision is placed just in front of and above the ear within the hair-bearing scalp. The scalp flap is undermined for 1 or 2 cm before the deep temporal fascia and underlying temporalis muscle areÂ incised (Figure 3). Dissection is carried through the deep temporal fascia, providing visualization of the vertically- oriented temporalis muscle. The muscle is split in the direction of its fibers down to the temporal bone.
After visualizing the temporal bone, a pocket is dissected beneath the temporalis muscle. The dissection is carried out directly on the bone with the coagulation mode of an electrocautery instrument. Hemostasis in this setting of implant reconstruction is very important. The dimensions of the pocket will determine the area of augmentation. For aesthetic indications, the area of undermining will extend from the lateral orbital rim anteriorly to just behind the hairline posteriorly. Vertically, it extends from the temporal crest to the zygomatic arch. It should not extend beneath the zygomatic arch, to prevent the implant from impinging on the condyle or coronoid process of the mandible (Figure 4).Â MMA is prepared by mixing the powder with the liquid material. While still in a liquid form, the MMA is placed in a 10-mL syringe. With a retractor elevating the muscle away from the bone, the material is injected into the submuscular pocket. Before the MMA hardens, it is molded into the desired shape by manipulating the overlying soft tissues so that they project to the same level as the lateral orbital rim (Figure 5).

The temporalis muscle and then the temporalis fascia are reapproximated before the scalp incision is sutured. No drains are placed. Figure 6 shows the clinical results of a patient treated with MMA for aesthetic indications. 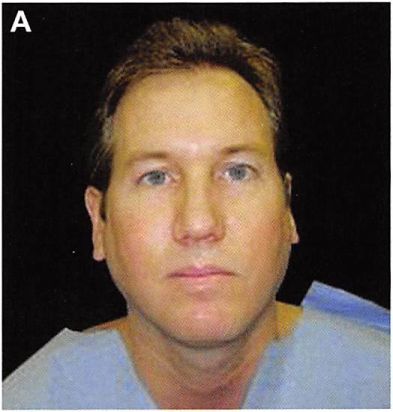 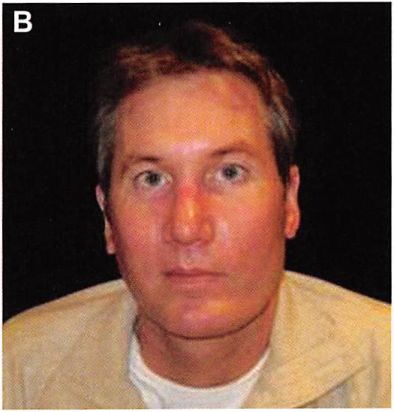 Figure 6. (A) This 35-year-old man was displeased with the asymmetries and imbalances of his facial contour. He felt that his temporal hollowing exaggerated the excessive width of his preauricular contour. (B) Six months after the latter of two procedures in which he underwent augmentation of the posterior/inferior mandible, augmentation of the infraorbital rim, superficial parotidectomy, facelift, and temporal augmentation with submuscular methyl methacrylate.

Postreconstructive Indications
Temporal depressions may occur after certain neurosurgical procedures are performed in the temporal area.9 This includes situations in which freeing the temporalis muscle origins from the temporal crest or away from the lateral orbital rim is required. Muscle reattachment is difficult and often less than ideal, leading to significant depressions beneath the temporal line. The deficiency is exaggerated when the overlying soft tissues are thinned due to posttraumatic scarring or atrophy.Â For this type of augmentation, scars from the previous surgical procedure are used (Figure 7).

A scalp flap isÂ raised, extending to the lateral orbital rim. The level of dissection is determined by the clinical situation but always respects the path of the frontal branch of the facial nerve. If the temporalis muscle is retracted (resulting in a prominence below the depression), the muscle is mobilized and reattached with cortical tunnels as a fixation point.
Prior to molding the implant, one or two titanium screws of 8 to 10 mm in length are placed in the lateral aspect of the lateral orbital rim, such that the screw head protrudes 4 to 5 mm from the surface of the rim. These screws will become embedded in the MMA and serve as anchors to prevent any movement of the implant (Figure 8). The MMA is prepared and allowed to cure until it is puttylike in consistency. It is then placed over any contour deficiencies to abut the orbital rim (Figure 9).
It is useful to place the scalp flap over the reconstructed area and mold the material through the overlying soft tissues as it hardens, encasing the protruding screw heads (Figures 10 and 11). This allows the MMA to also correct any deficiencies in the overlying scalp flap. Placing MMA beneath any scalp incision suture lines is avoided, if possible, since any suture line breakdown would result in implant exposure. A suction drain is placed, which exits from a separate stab-wound incision. A mildly compressive tape dressing is applied over the non-hair-bearing area of reconstruction. Intravenous antibiotics are administered perioperatively and then given enterally for five days postoperatively. 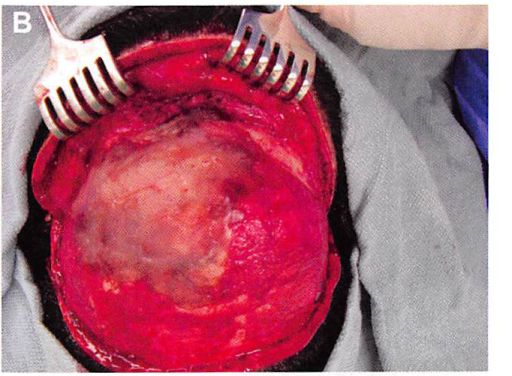 DISCUSSION
Similar to what was described by Ousterhout,15 we have found that it is better to undercorrect than to overcorrect the temporal contour. Almost any amount of material placed beneath the temporalis muscle results in a contour improvement. Augmentation beyond the normal limits of the temporal projection results in an easily-recognizable contour deformity. Ousterhout also recommended augmenting one side at a time. Simultaneously augmenting areas on opposite sides of the head with a semi-liquid, rapidly-curing material is technically challenging and predisposes to contour imperfections resulting from gravitational and head-positioning effects on the curing material.
We have augmented the temporal area for aesthetic purposes 35 times over the last eight years. Of these, five patients underwent revisional surgery. Three of those patients had contour irregularities corrected by reducing prominences at the muscle closure site with a contouring burr. One patient deemed her temporal area too full after augmentation, and her implant was subsequently removed. One of the first patients in the series had the inferior border of her implant reduced because it impinged on the coronoid process with maximum jaw opening. (In retrospect, the submuscular pocket was dissected beyond the superior border of the zygomatic arch.) Removal of both implants required splitting the temporalis muscle in the direction of its fibers from temporal crest almost to theÂ zygomatic arch. In the series of 35 patients, there has been no instance of infection with MMA to augment the temporal area for aesthetic or postcraniotomy indications.

MMA augmentation is an effective means of restoring the contour of the temporal area. The material, which has been used for decades to reconstruct full-thickness defects of the skull vault, is biocompatible and easily moldable. It provides a predictable and permanent result. Placement of MMA in the submuscular pocket (unlike with preformed temporal implants, which are placed in a supramuscular plane) avoids any risk of damage to the frontal branch of the facial nerve.